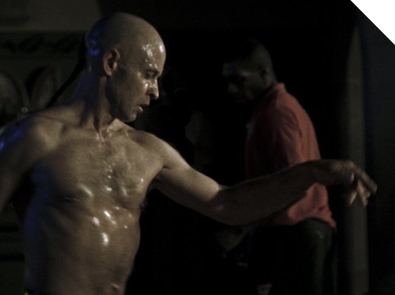 ‘Long After Tonight’ documented a specially constructed event staged in St Salvador’s Church, Dundee, Scotland, parts of which were used during the 1970s as a venue for some of the city’s first Northern Soul sessions. (Northern Soul is, simply put, African American Soul music that was transferred to the north of England during the 1960s, thereby dislocating it from its original context and establishing this distinct genre).

Although the sessions at ‘Sally’s’, as St Salvador’s was fondly known, were held in an adjoining hall, for the purposes of the film permission was sought to use the church itself. By staging the event in the unique interior of the nave, the dancers were surrounded by the beautifully gilded, ornate religious imagery of the building, thus creating a connection between the location and the activity, as expressions of faith, commitment and shared purpose.

The people that participated in the filming came together from across the UK, many of whom attended the original nights held at St Salvador’s. This link to the roots of the scene in Dundee, and the Northern Soul fraternity as a whole, was critical in establishing a heightened sense of unity and emotion, which is evident in the final film.