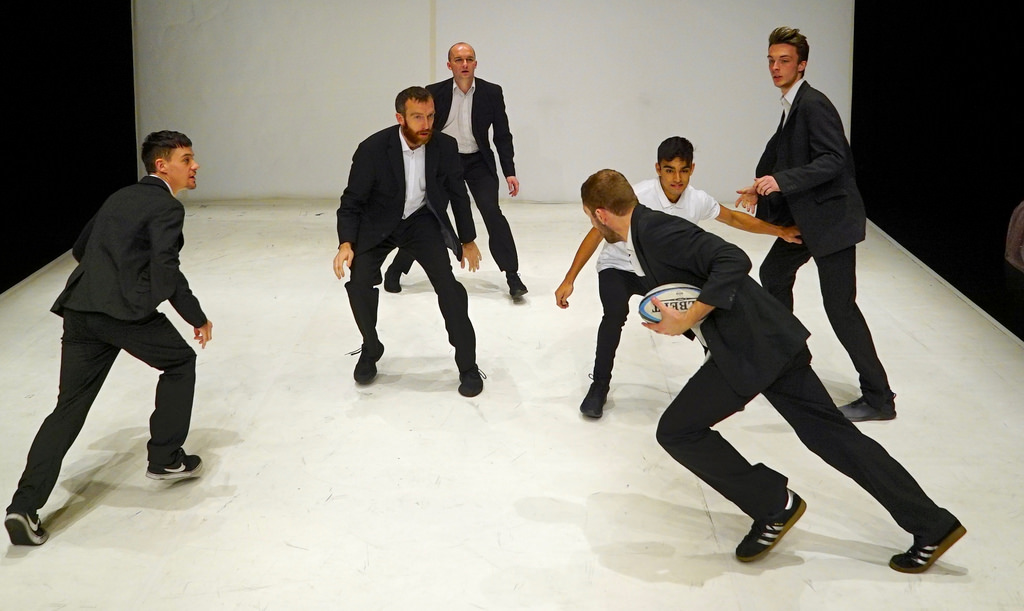 The Arts Centre, Edge Hill University presents SHUT DOWN a new work for an all male ensemble by Vincent Dance Theatre What is it like to live as a man today?

Vincent Dance Theatre (VDT) makes crucial performance for the critical times in which we live. SHUT DOWN is Vincent Dance Theatre’s thought-provoking, timely new work that investigates the pressures, contradictions and confusions of being a man. Performed by an outstanding cast of seven male performers, including three exceptionally talented teenagers, movement, spoken word, rap and striking visual imagery collide to shine a fierce and funny light on masculinity. SHUT DOWN explores gender fluidity, absent fatherhood, male depression, pornography and misogyny.

The voices of the young people in the work are urgent and moving: they show us, in no uncertain terms, what needs to change. SHUT DOWN is the result of a collaboration between VDT and Brighton based AudioActive (http://audioactive.org.uk), a music charity working with young people and contemporary urban culture. Five young people from AudioActive created original material for the production, with 15- year old Eben’ Flo’s passionate spoken word pieces, Marshall Mandiangu’s songs and Matt

Cathy Butterworth, Director and programmer for Arts Centre, Edge Hill University says “I am so proud to be bringing this show to Ormskirk, the only performance in the North West, it’s an important work for all to see and especially young men. The work is raw yet thrilling and expertly well crafted. We would love for you to take this one and only opportunity to see this work in the region. Dance Theatre at its best and a must see”

Discussing SHUT DOWN on BBC Radio 4’s Woman’s Hour in 2017, Charlotte Vincent said: “Young men are struggling with isolation, feeling lonely, absent father figures and not knowing where to go with their problems. We know too that pornography is being seen by boys at ever younger ages and how this is affecting their psychological wellbeing and their notion of what young women are for them. With SHUT DOWN, we’re playing with archetypes and behaviours to represent the internal and external struggle men face to find a role in contemporary society”

Directed by ‘one of the most important feminist artists working in Britain today’ (The Observer) SHUT DOWN explores the spectrum of modern day masculinity and investigates the pressures, contradictions and confusions of being a man.

Vincent Dance Theatre’s first ever all male production is timely, humorous and highly charged ‘political and poetic dance theatre’ (London Dance), from one of the UK’s most risk-taking and rigorous choreographers.

The work offers not only dance but, film, spoken work and rap with real-life testimony.

Adult supervision for under 14’s is advised due to strong language and adult themes.

‘As a 22-year old man growing up in the world, I cannot thank you enough for reflecting a mirror back to me during my journey and struggle to understand manhood today’ Audience Member, November 2017