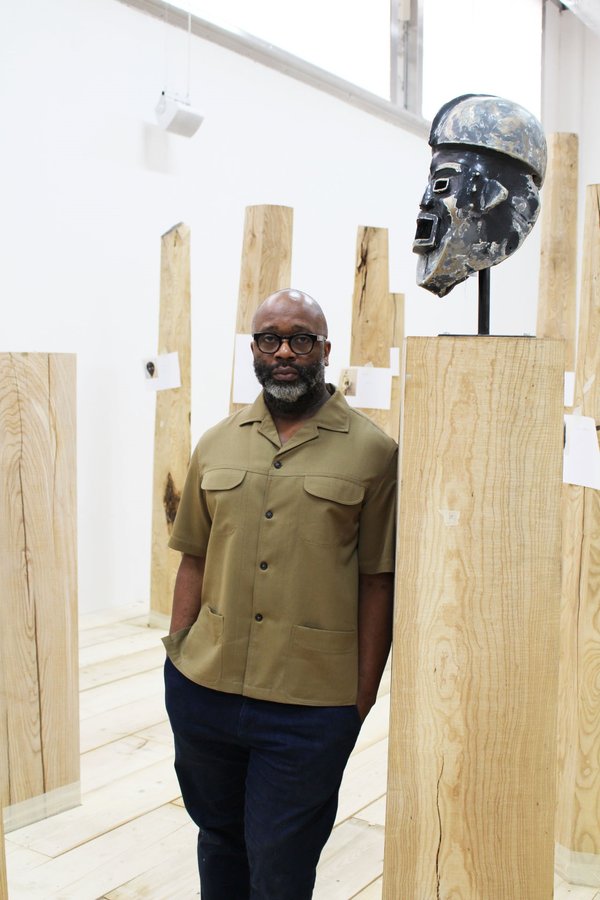 An exciting and rare opportunity to hear artist Theaster Gates

Hear Theaster Gates, one of the world’s most influential living artists, discuss his career and art practice. As a socially engaged artist, Gates’ art has transformed places and aims to improve the lives of the people who live there. During this talk, the artist will share his thoughts about his ongoing artistic endeavours on questions of land ownership, displacement, and interracial relationships.

Got a question for Theaster Gates? Take part in our audience Q&A – your chance to talk to the artist.

This talk is taking place at the Museum of Liverpool in the Global City Auditorium. See his exhibition, Theaster Gates: Amalgam at Tate Liverpool from 13 December 2019 – 3 May 2020.

Theaster Gates is currently Distinguished Visiting Artist and Director of Artist Initiatives at the Lunder Institute and his research on the island led to the creation of the exhibition.

Theaster Gates lives and works in Chicago. His work explores value, economy and material exchange in charged social contexts. Gates created the Rebuild Foundation in 2010, a non-profit platform aimed at regenerating communities through neighourhood revitalisation. Many of the foundation’s initiatives have focused on Chicago’s South Side, creating hubs and archives for black culture, which serve as catalysts for discussions on race, equality, space and history.

Michael Ralph is Associate Professor; Director of Africana Studies in the Department of Social and Cultural Analysis and the School of Medicine at New York University. His research integrates political science, economics, history and medicial anthropology through an explicit focus on debt, slavery, insurance, forensics and incarceration. In 2015 he published Forensics of Capital and he is currently working on 2 books that centre on slavery, insurance and incarceration. Professor Ralph has built the multimedia archive, Treasury of Weary Souls, the world’s most comprehensive ledger of insured slaves.

Grace Wales Bonner is a British fashion designer. In 2014 she launched her line, Wales Bonner, which proposes a distinct notion of luxury via a hybrid of European and Afro-Atlantic approaches. In 2015 she was awarded Emerging Menswear Designer at the British Fashion Awards and in 2019 Vogue editor-in-chief Anna Wintour named her as one of the young designers she’s most excited about. In 2019 she presented A Time for New Dreams at London’s Serpentine Gallery, which explored magical resonances within black cultural and aesthetic practices.