Home The Royal Standard: ‘How Much Are They Paying You?’

The Royal Standard: ‘How Much Are They Paying You?’ 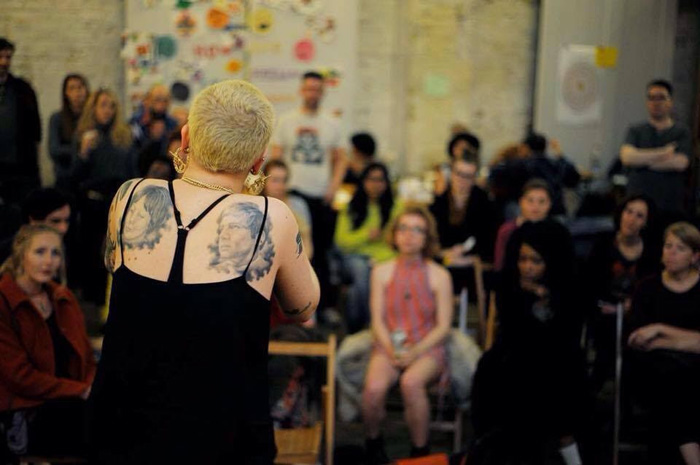 The Royal Standard: ‘How Much Are They Paying You?’

HOW MUCH ARE THEY PAYING YOU?

ARTIST IN RESIDENCE at The Royal Standard: LIV WYNTER

The Royal Standard are incredibly excited to announce a new residency that will take place during the opening week of New Contemporaries and Liverpool Biennial called HOW MUCH ARE THEY PAYING YOU?

Running for a week from Monday 4 July through to Sunday 10 July 2016 Liv Wynter will be running a series of events including live performances, an artist talk and a workshop, whilst also producing a publication.

HOW MUCH ARE THEY PAYING YOU? aims to discuss sensitive, but critical, issues that artists face in our society addressing themes of class, labour and cold hard cash.

The lineup of events will include:

About Liv
Liv Wynter is a queer, working-class artist living and working in South London. Through anarchic and punk techniques she attempts to explore politics and gender through the language of rap and poetry. In this context Liv creates platforms where she can approach sensitive discussions that society struggles to deal with such as pay, class, gender, sexuality and relationships.

Liv is able to deal with these complex topics by using essential tools to her practice such as wit, honesty and frankness whilst performing. Liv is driven by the desire to connect with young, working-class people in order to promote the accessibility of contemporary art in all its forms.

Her recent project HEADFUCK took place on a digital platform and was made up of series of one-on-one skype performances spanning 31 days, all starting at exactly 1am.