Picasso Linocuts from the British Museum 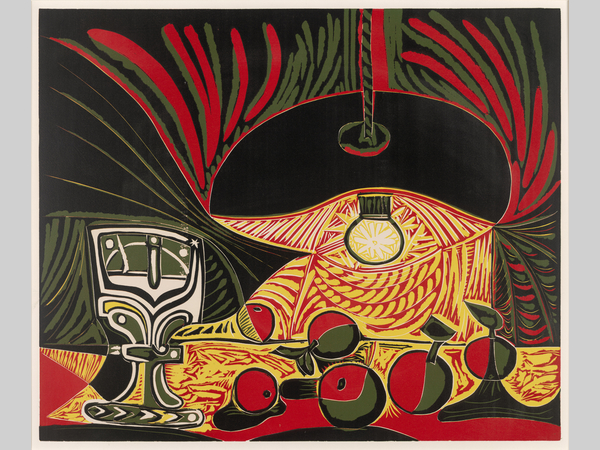 Picasso Linocuts from the British Museum

Picasso Linocuts from the British Museum highlights a particularly prodigious period in the artist’s life. Picasso had made prints throughout his long career – more than 2,500 principally in etching, lithography and linocut. His earliest linocut is from 1939, but his major period of working in this medium was from the mid-1950s to the early 1960s.

Producing linocut posters for local ceramic exhibitions and bullfighting events in Vallauris with the talented local printer Hidalgo Arnéra, Picasso began to experiment with new ways of producing colour linocuts which rejected the established method of cutting a separate block of linoleum for each colour. Instead Picasso, impatient to see the results, progressively cut and printed from a single block that required him to foresee the final result, as once he had gouged away the linoleum surface he could not go back. This reductive technique also meant it was impossible to reproduce the previously created image afterwards.

Picasso’s astonishing technical innovation and creativity is divulged over the three sets:

Still Life under the Lamp comprises nine colour prints, each showing a subsequent stage in the linocut’s progression. At each stage the viewer sees an image that would appear finished but Picasso goes further, pursuing it to its final form. Each print is vivid in the retro colours of the 1960s: citron yellow, acid green and bright red. The proofs are extraordinarily rare, and the complete set is unique.

The second set is four progressive proofs for a monochrome subject, Jacqueline Reading, (1962). The sitter is Picasso’s second wife Jacqueline Roque with whom he lived in the last years of his life. She is posed reading, one hand held to her face and eyes cast down. For this print Picasso used two blocks. In the first block he scratched the surface with a stiff comb to create the tones of Jacqueline’s head and bust. A second block was cut with deeper gouges to leave just her outline. The print from the second block was superimposed over the first to achieve the final image.

The Nude Woman at the Spring (1962) series consists of four prints inspired by a figure from Manet’s nineteenth-century masterpiece Déjeuner sur l’herbe (Lunch on the Grass). Built in layers of brown and black and white the sinuous figure leans over a waterfall. The figure continued to appear in his later sculptural objects.

Xanthe Brooke, Curator of European Fine Art said: “Picasso Linocuts from the British Museum reveals how, even towards the end of his career, when he was in his eighties, Picasso was an exceptionally innovative artist.

“Displaying the series of prints in the progressive stages is a superb opportunity to appreciate the complexity of working in this manner and the genius of Picasso’s creativity.”

Picasso Linocuts from the British Museum is the next event in an exciting year for the Lady Lever Art Gallery, which recently opened its newly refurbished South End galleries, following a £2.8m major development project, part funded by the Heritage Lottery Fund.

This exhibition was developed in partnership with the British Museum and generously funded by the Dorset Foundation.