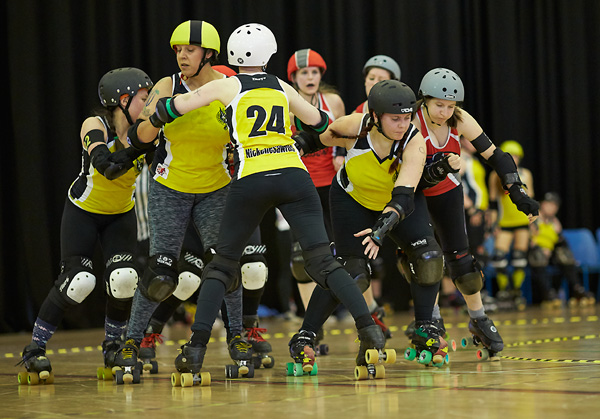 Celebrating local women’s achievements from the past and present

National Museums Liverpool is hosting a special ‘Women on The Waterfront’ weekend to showcase local women’s achievements from the past and present, ahead of International Women’s Day on Tuesday 8 March.

At Museum of Liverpool, one of the highlights is an appearance by the Liverpool Roller Birds, who compete in the city’s first roller derby league. They will be demonstrating their techniques and showing recorded footage of them in action to help visitors understand more about this exciting sport. In addition, a free trail around the Museum will invite visitors to discover the many stories of inspiring women throughout the venue. MaMa choir will also be singing.

At Merseyside Maritime Museum and Seized!, visitors can find out more about mermaids, early fossil-hunter Mary Anning, and listen to special performances from The Choir with No Name.

International Slavery Museum will be holding adult colouring-in sessions designed by illustrator, Laura-Kate, inspired by the stories of women across our waterfront venues.

Julia Bryan, Senior Education Manager, National Museums Liverpool, said: “We are really proud to be celebrating the achievements of women at our waterfront Museums and to promote the social, economic, cultural and political achievement of women around the world.

“There is so much to showcase and celebrate International Women’s Day – it is a really packed programme and everyone will find something to engage them.

“As well as the fun, there is a more serious side too – we’ll have information stands where women can find out more about protecting their health and safety. We’re also appealing for visitors to donate new women’s bras and knickers at Merseyside Maritime Museum for the Smalls for All charity which distributes them to girls and women in Africa, helping to protect them from potential disease and abuse”.

Inspirational Women from Liverpool: 2-3pm, Museum of Liverpool. Lucinda Matthews-Jones, Lecturer of History at John Moores University, will be delivering a talk about some of the influential women who have left their mark on Liverpool’s history.

Female Abolitionists: 2- 3pm, International Slavery Museum. Dr Ray Costello will present a talk highlighting the female abolitionists who fought to end slavery, looking at how they were perceived and treated.

International Women’s Day: 1pm, Walker Art Gallery. A talk that celebrates the four female winners of the John Moores Painting Prize; Mary Martin, Lisa Milroy, Sarah Pickstone and Rose Wylie.
Ongoing exhibition Poppies: Women and War at Museum of Liverpool (until 5 June 2016) explores the thousands of women who suffer as a result of war, but whose stories are lost behind the dramatic headlines from the battlefields. Exhibition photographer, Lee Karen Stow will be giving a talk and tour about her inspiration, on 19 March.

Adult colouring
5, 6 March 2016
1-4pm
Drop in to take part in a fantastic colouring workshop for adults with illustrator Laura-Kate Draws. Have a go at colouring in our big picture designed by Laura-Kate, inspired by some of the wonderful women that you can learn about in our waterfront venues. We’ll also have colouring sheets that you can decorate and take away. See laura-katedraws.co.uk

Female Abolitionists
8 March 2016
2-3pm
Dr Ray Costello will present a talk highlighting the female abolitionists who fought to end slavery, looking at how they were perceived and treated.

Information Stalls
5 March 2016
10.30am-4pm
An opportunity to talk to members of the Women’s Institute, Stop the Traffik, UK Border Force and other services that promote women’s health and safety

Mermaids in their Element
5 March 2016
1.30-2.15pm
Presentation with Professor Sarah Paverly and the Liverpool Players. Illustrated talk for adults and children- looking at mermaids in folk lore and popular culture

Tales from the Tent
5 March 2016
11.30am, 12.30, 2 and 3pm
Come along to our Tent of Stories and hear some inspiring stories about Mary Anning- an early fossil hunter. Mary played an important part in discovering many fossils and dinosaurs.

Adult colouring
5, 6 March 2016
10am-12.30pm
Colouring Illustrations have been especially commissioned for the Museum of Liverpool by the local illustrator behind ‘Laura-Kate draws’ as made popular by the current colouring craze designed for adults.

International Women’s Trail
5, 6 March 2016
Throughout the day
Pick up a free trail from the information desk on the ground floor and discover some of the inspiring women featured in the Museum.

Deeds not Words
6 March 2016
1.30-2.30pm
Discover what the ‘Representation of the People Act 1918’ meant for women across Britain, from a Liverpool working class woman’s perspective.

Magical History Suffragette Special
6 March 2016
1.30-2.30pm
Join a member of our education team to discover what lengths women were willing to go to for the right to vote.

Inspirational Women from Liverpool
8 March 2016
2-3pm
Lucinda Matthews-Jones, Lecturer of History at John Moores University, will be delivering a talk about some of the influential women who have left their mark on Liverpool’s history.

Pantstastic!
5 March 2016
1-4pm
Design your own knickers and underpants to hang on our bunting, a craft inspired by the fact that in some parts of the world women and girls have no access to this basic requirement. A collection point will be available for your donations of new pants and bras or clean old bras.

Storytelling
6 March 2016
12.30-1pm, 2-2.30pm and 3-3.30pm
Come and listen to some inspiring stories about Mary Anning- an early fossil hunter. Mary played an important part in discovering many fossils and dinosaurs. Suitable for children aged 3 and over with their accompanying adult.

The Choir with No Name
6 March 2016
1-1.30pm and 3-3.30pm
This fabulous choir will entertain you with uplifting contemporary tunes. The Choir with No name works with those who have experienced homelessness.