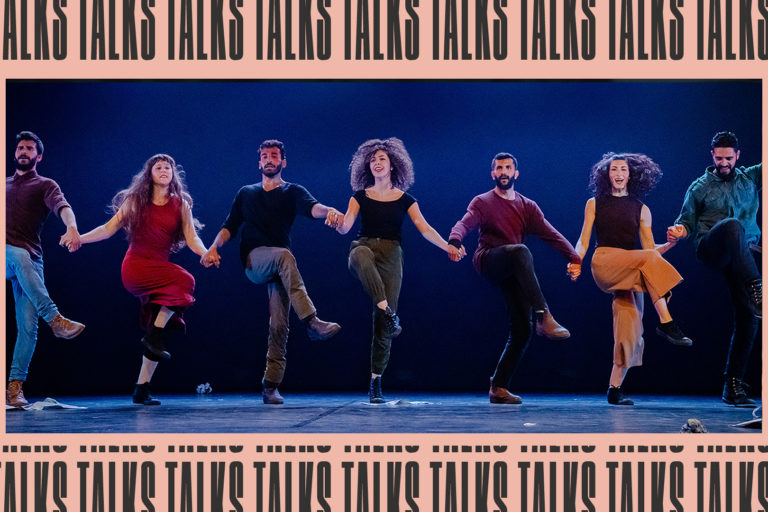 Members of Hawiyya Dance Company and El-Funoun Palestinian Popular Dance Troupe held a recent series of discussions on issues related to contemporary dabke and their current collaboration ‘Curfew’, which LAAF will be bringing to Liverpool in partnership with MARSM UK in the near future. We are pleased to host these discussions online as part of this year’s festival.

Hawiyya Dance Company was founded in 2017 as an all-women’s collective, based in London, who explore identity, culture and resistance through dance. The group uses folk dance ‘Dabke’ and contemporary dance to create narrative works that explore themes such as resistance, oppression, displacement, social justice, individual and cultural identity.

The members of Hawiyya are from diverse backgrounds and nationalities, and have experience in different forms and styles of dance training. The dancers unite in their commitment to anti-racism and anti-imperialism in all they do. The aims of the company is to empower people especially women, to build community, to raise awareness of human rights and to demonstrate solidarity to the causes they support through dance and culture.

In their short time Hawiyya have achieved much success with their own productions, such as full-stage production ‘Curfew’ in collaboration with El-Funoun PDT, performed over a two sell-out nights at Rich Mix London, and one in Ramallah, or full-stage production ‘Safar: Journey’, co-created and performed with refugee and migrant women at the Shakespeare’s Globe and V&A Museum. To date, Hawiyya have showcased their artistic work at major events, such as Liverpool Arab Arts Festival, Migration Matters Festival, GreenBelt festival, Palestine International Festival, and partnered with leading artists.

El-Funoun Palestinian Popular Dance Troupe is an independent, non-profit artistic organization that is virtually entirely volunteer-based. El-Funoun was established in 1979 by a small number of enthusiastic, talented and committed artists. Since then, El-Funoun has been crowned as the lead Palestinian dance company in Palestine, as well as among Palestinians in exile. It holds an impressive track record of over one thousand performances locally and internationally. It also produced 15 productions and over ten dance scenes. El -Funoun has won several commendation certificates and awards over the years.

Since its inception, El-Funoun has aimed at expressing the spirit of Arab-Palestinian folklore and contemporary culture through unique combinations of traditional and stylized dance and music. The Troupe’s repertoire comprises folkloric dance forms, called “dabke”, in addition to more elaborate choreographed forms that embody El-Funoun’s own unique vision of Palestinian dance. El-Funoun is widely recognized as the cultural entity that has played the most significant role in reviving and reinvigorating Palestinian dance and music folklore.