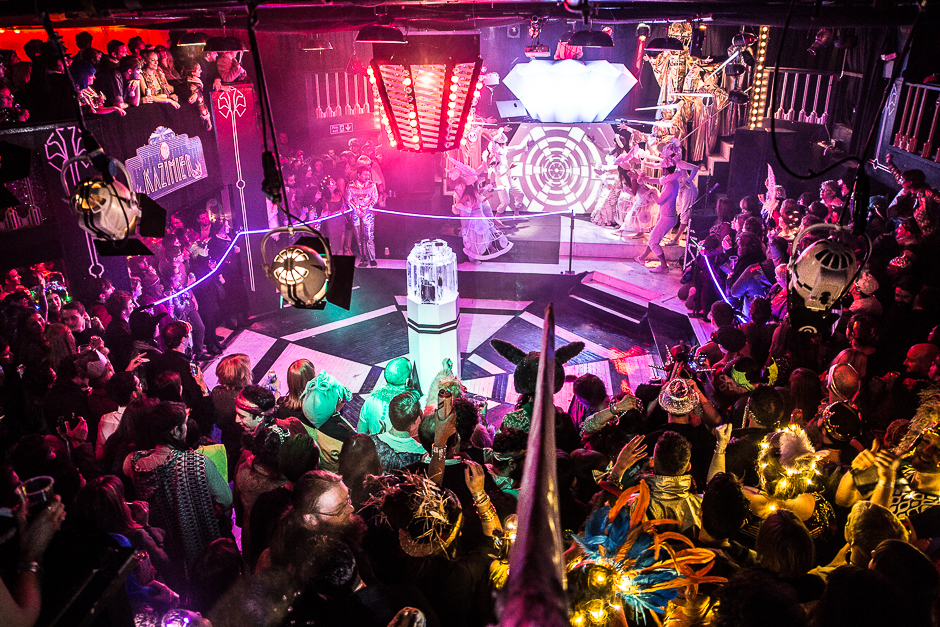 After news that the The Kazimier’s iconic home in Liverpool City centre would be demolished to make way for re-development, its legacy was honoured on the 31st December 2015 with a farewell party like no other.  ‘Escape to Planet Kronos’ was spread across 3 venues, turning Wolstenholme Square into the scene of a live battle re-enactment featuring over 200 performers, an elevating 30ft robot and spacecraft flown into the night sky.

After a year of upheaval, The Kazimier has constructed a new home on Liverpool’s North docks – The Invisible Wind Factory, featuring a 1300 capacity venue, 18 artist studios, workshop, electronics lab and garden.

‘To celebrate this year of transition, The Kazimier will again hold a huge New Years Eve party, transforming their new space into an immersive world from the future.‘

‘Kazimier New Years Eve parties have been built on the mythical tale of ‘Captain Kronos’ – a time travelling hero and his intergalactic adventures – this year the story will tread deeper into an ominous and sinister territory.’

The Kazimier opened Invisible Wind Factory in May 2016 with its show ‘OMPHALOS’ – an operatic walk-through performance combining gesture technology, virtuoso singers and pyrotechnics. Following this, the venue has hosted large-scale nights featuring the likes of Black Madonna, Peaches, Bicep and Floating Points. 2017 is already set to be a year of special events.

Ticket Link: will appear on our website at 9.00am Thursday 17th November www.thekazimier.co.uk