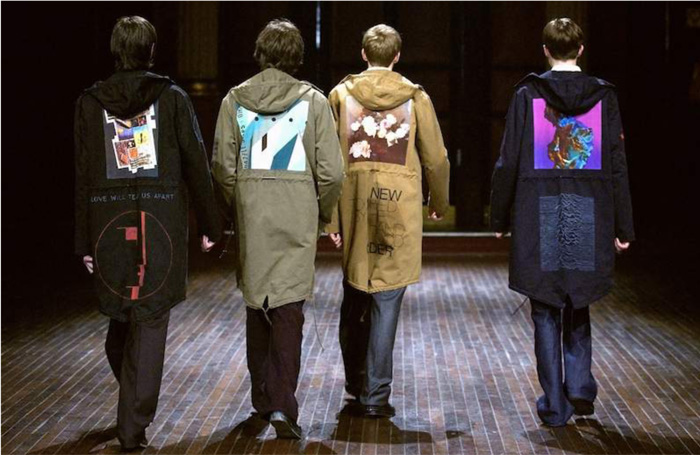 Co-curated by Lou Stoppard and Adam Murray, North explores the way the region is depicted, constructed and celebrated in select photographs, artworks and fashion collections. The show brings together collective visions of the North, unpicking the tropes and themes that appear regularly in design and media and takes into account the rich cultural history of the region. The exhibition features work from some of fashion’s most notable image-makers. Early photography by Jamie Hawkesworth and Alasdair McLellan, dating back to the first years of their careers, is shown alongside historic prints from Glen Luchford and Nick Knight. Original prints from Luchford’s first ever shoot , a session with The Stone Roses for The Face in 1989, will be on display. Additionally, work by contemporary artists such as Turner Prize winners Mark Leckey and Jeremy Deller will be exhibited.

Fashion garments include a Raf Simons parka from the renowned A/W 2003 Control collection, which featured graphics from Peter Saville’s archive and made headlines this year for its current value of $20,000. Work by respected but now defunct former label New Power Studio, one of the original recipients of Fashion East’s MAN award, will be displayed alongside new work by rising talents such as Christopher Shannon and John Skelton. Iconic archive shoes by adidas, a staple of Northern style, will also be on show.

New collaborative work, such as a project by Hacienda designer Ben Kelly and American fashion designer Virgil Abloh, who is a long term fan of the sounds and graphics of 1980s Northern England, will also be on display. Presented are candid interviews produced by SHOWstudio, talking with talents born and bred in the North, exploring the influence of the region on visual style. Subjects include Simon Foxton, Stephen Jones, Claire Barrow and Christopher Shannon.

The exhibition is kindly supported by adidas.