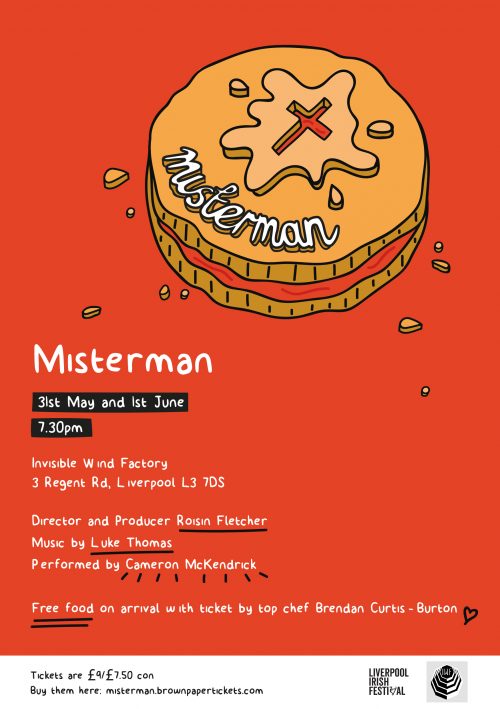 Following the success of their acclaimed production Scadán last year as part of the Liverpool Irish Festival, Roisin Fletcher and Luke Thomas present this new Irish classic at Liverpool’s most exciting venue.

“Sin has become our religion,” mourns Thomas. “Greed is our communion and evil is our God.” The self-proclaimed man of God is tormented by the behaviour of his neighbours in Inishfree, and is on a quest for redemption. He knows that jovial Dwain Flynn is a miserable drunk, that Timmy O’Leary enslaves his lovely mother, and that sweet Mrs Cleary is a blasphemous flirt, so what is he to do?

As the plot unfolds, the audience witness Thomas’ re-telling, or rather, re-making of a very significant day in the town. Sifting through his archived tape recordings of conversations and arguments with his peers, Thomas edits their stories, playing every character in the town. Directed by Fletcher, with musical direction by Luke Thomas, the staging sees the sometimes bodiless voices of the townsfolk haunt Thomas, engulfing the central character in his obsessive story telling.

Of his role McKendrick says “After reading Misterman myself I thought it’d be stupid to turn down the opportunity of playing this unpredictable and misunderstood character. You feel for him and then you’re disturbed by him.”

Director Roisin Fletcher says “I saw an early production of the play starring Cillian Murphy, which had a massive impact on me, so I was eager to bring this new writing to more people.”

Roisin Fletcher and Luke Thomas successfully produced, directed and musically directed Scadán as part of the Liverpool Irish Festival 2016 at the Invisible Wind Factory, described as “the shining jewel of the festival”  by Getintothis.co.uk.

A story of right and wrong, religion and redemption, Misterman will run for two consecutive nights at Invisible Wind Factory, from 31 May – 1 June. Tickets are £9 / £7.50 for concessions, and available from: http://misterman.brownpapertickets.com/