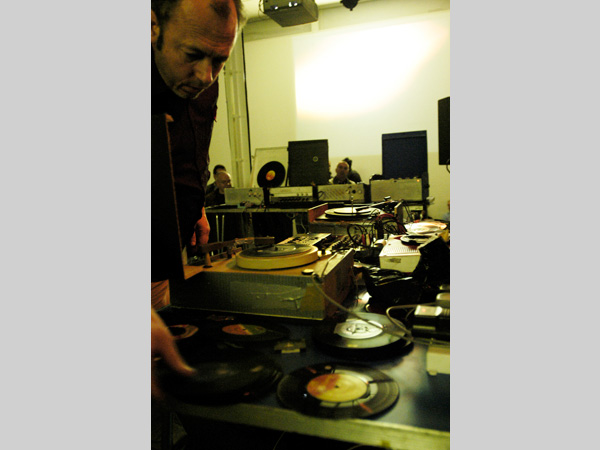 The event will begin with a performance by John Bowers and Tim Shaw (Newcastle Sound Spaces) entitled Unfoldings, accompanied by visuals by Simon Bowen.

Philip will be joining us for this event following the release of his new album, available for pre-order here. Listen to an exclusive preview track here.

Philip Jeck works with old records and record players salvaged from junk shops, playing them as musical instruments to create an intensely personal language that evolves with each added part of a record. He started working with record players and electronics in the early ’80s and has made soundtracks and toured with many dance and theatre companies as well as producing solo concert work. His best known work Vinyl Requiem (with Lol Sargent), a performance for 180 50s/’60s record players won Time Out’s Performance Award in 1993. Over the last few years, Philip has returned to visual art, creating installations using between six and 80 record players including Off The Record for Sonic Boom at The Hayward Gallery, London in 2000. In 2010, Philip won The Paul Hamlyn Foundation Composers Award.

Simon Bowen is a designer-researcher; a designer working largely in interaction design, also researching design and its application often through its practice. He is currently based at Open Lab, Newcastle University, supporting PhD students with their research projects and conducting cross-project research into the value and impact of collaborative projects centred on digital making.

John Bowers works with modular synthesisers, home-brew electronics, and reconstructions of antique image and sound-making devices, alongside contemporary digital technology. He makes performance environments which combine sound, image and gesture at a fundamental material level. He has performed at festivals including Electropixel Nantes, Piksel Bergen, BEAM Uxbridge and Spill Ipswich, and toured with the Rambert Dance Company performing David Tudor’s music to Merce Cunningham’s Rainforest. Amongst many collaborations, he works with Sten-Olof Hellström and in the noise drone band Tonesucker.

Most recently, in collaboration with Tim Shaw, John has been formulating strategies for ‘Pubic Making’ – making work in public, with the public – at specially selected sites of psychogeographic salience or in relation to notable historical events. This has included Interglacial/Erratics (with the Pacitti Company, Ipswich, UK), SoundLines (with FACT, Liverpool, UK), Salient/Re-Entrant (as part of the Fort Process festival, Newhaven Fort, UK) and War Workings (as part of Tyne and Wear Archives and Museum’s WW1 commemeoration programme, Decoded, Newcastle, UK). John Bowers works in Culture Lab and Fine Art, Newcastle University, where he directs research on Digital Cultures.

Tim Shaw has worked internationally as a professional composer, performer, sound designer and researcher. His practice incorporates diverse approaches to sound capture and processing, and includes creating immersive and site responsive sonic installations. His compositional methods include field recordings, synthesized sounds and live electronics, providing a wide scope for creative diversity. At the heart of his work lies a concern with the auditory reflection and mirroring of real world environments through sound and technology. He is currently studying a PhD in Digital Media at Culture Lab alongside managing Newcastle based record label Triptik. Collaboration plays a central role in his approach, he has been lucky enough to make artistic work with many people including Chris Watson, John Bowers and Sébastien Piquemal. Tim has presented work in various international venues including Café OTO, NIME, CHI, NK Projekt, ZDB, CTM and FACT Liverpool.