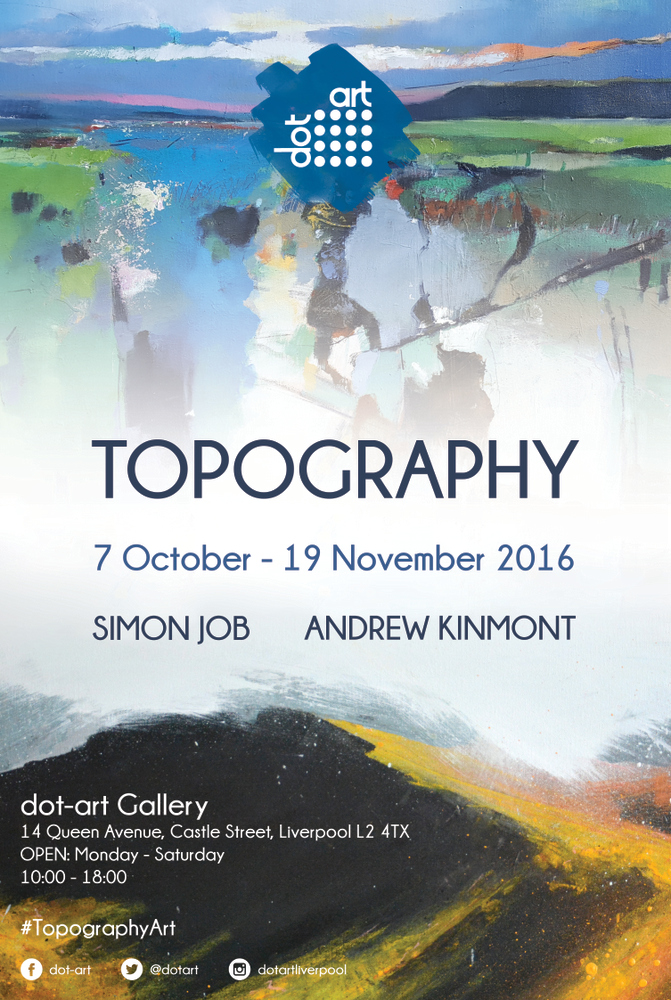 The dot-art Gallery’s new exhibition, Topography, opens on Friday 7th October and will showcase the work of two North West based artists, Andrew Kinmont and Simon Job, who explore the portrayal of landscape in very different but complimentary ways. They also share a common fascination with the construction of the artwork itself. For the work in this exhibition, the physical act of painting and the conscious and subconscious decisions made during the process are as important as the original subject matter.

Andrew graduated from University of Wales with a first class Fine Art Honours degree, obtaining further training from St Martins College London and West Dean College, Chichester. In 2014 he was elected as an Associate Member of the prestigious Royal Birmingham Society of Artists. His work has appeared on the cover of various magazines and catalogues and published in ‘101 Abstract and Non-Figurative Artworks’ (Published 2015). He exhibits work extensively, including regular selection for the Royal Institute of Oil Painters annual exhibition at the Mall Galleries, London. In recognition of his growing status his name was added to the notable “Who’s Who in Art’ (Movern Press) in 2014. Recently he was elected as a member of the Manchester Academy of Fine Arts. He currently lives and works in Cheshire

Andrew takes his direct experience of nature as his inspiration. As wind, erosion, ageing, decay constantly alter what we see in nature, so too his paint is layered or poured, surfaces erased and reworked. He constantly struggles between allowing materials to follow their own course or directing them towards his own intuitive ends. Often his paintings do not represent a recognizable landscape, but the colours, textures and shapes of the composition evoke natural qualities of solidity, form, air and space. Traces of marks and materials are left on the surface, making the viewer aware of the act of painting as well as the innate beauty of the materials themselves. The end result is paintings which have their own unique form, with their roots in both nature and his own subjective experience.

“I respond to my own sensory experience of landscape through direct gestural brushmarks, which trigger the senses and resonate on a deeply emotive level. I hope these paintings act as vehicles for
viewers to connect with places, experiences or memories deep in their own subconscious, taking them on a journey of their own.”

Liverpool based Simon is earlier in his career; graduating from LJMU in 2011, he has since had a number of solo and group shows across the region. He draws inspiration from features such as skies, mountains and seas and creates images of landscape that ebb and flow between abstraction and representation. Mark making is integral to his working method, layers of paint hang upon a skeleton of underpainting and drawing. Often what is left exposed becomes as important as what is added. Simon carefully selects the substrate he paints on for textures or characteristics that suggest the qualities of the landscape he is working with, sometimes choosing less traditional materials such as steel and other found objects and working with the inherent idiosyncrasies of the surface. The aim of the work is to convey something of the landscape but also to leave clues to the way in which it has been painted / interpreted.

“Fundamentally, my practice is an investigation into environments. I’m interested in a wide variety of environs from the natural to the built, from the micro to the macro and from the tangible to the conceptual. I create paintings, mixed media works and photographs that intend to distill certain characteristics or nuances within a specific environment. In this sense my work is a form of abstraction but not always abstract in the way that the term has come to be understood. My aim as an artist is to find and extract a previously unseen beauty or peculiarity from my surroundings.”

The exhibition continues until 19th November.