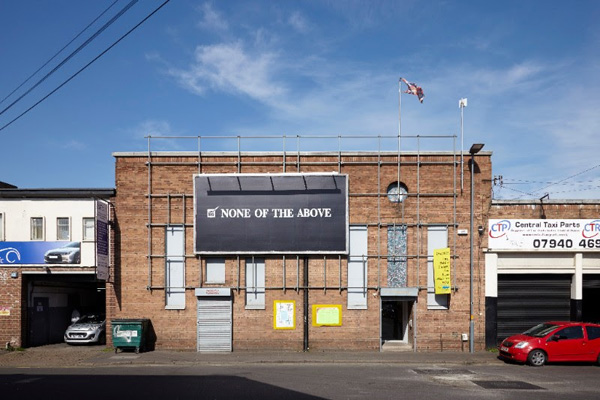 Join the Liverpool Biennial Associate Artists at Bluecoat for a unique ‘speed meeting’ experience. Throughout the evening, you can talk to ten artists based in the North of England and find out more about their work in an informal setting, in which each artist will present their practice to small audience groups.

Simeon Barclay (b.1975, Huddersfield) lives in Leeds. Barclay is interested in exploring the dynamic nature of language, the mediated image, and objects that both seduce and provoke. He understands these impulses in relation to the human condition, an existence Barclay perceives as being caught up in the tumultuous, unfixed process of situating and defining ourselves within culture and tradition.

Jacqueline Bebb (b.1977, Chester) lives in Chester and Portland, Oregon, USA. Bebb is interested in the impact of geographical dissonance on artistic endeavor. She uses travel as a means to galvanise thought, question cultural obsessions and examine the constructs of relationships from lifelong bonds to fleeting affinities.

Lindsey Bull (b.1979, Hereford) lives in Manchester. Bull is a figurative painter whose work explores psychological states. She is interested in different states of mind and how these interior lives manifest or hide themselves from the outside world. With a fascination for dark, idiosyncratic psychologies, her paintings are investigations into often sidelined or marginalised groups and individuals.

Robert Carter (b.1987, Blackburn, Lancashire) and Lauren Velvick (b.1988, Preston, Lancashire) live in Manchester. They started working together in 2014 and founded ‘The Exhibition Centre for the Life and Use of Books’, one long, ongoing self-taught history lesson that touches on art, publishing, censorship, and regional politics. They are currently interested in translating ideologies into pattern.

Nina Chua (b.1980, Manchester) lives in Manchester. Chua is interested in surface as a visual and visceral experience. Through repetition and accumulation, surfaces are built up which foreground line, colour, and support. Nothing is concealed; the process is essentially laid bare. The work is an exercise in limitation and the economy of means, which is used to maximal effect.

Matthew Crawley (b. 1965, York) lives in Leeds. Crawley’s practice may be seen as a particular polemic brought about in some part by the influence of his day job: art technician. The artist has, made manifest an invisible friend, assumed the identity of a Sardinian Bottlenose Dolphin, resurrected a closed provincial Art Gallery and constructed a one to one scale facsimile of his 13-year-old daughter’s bedroom.

Frances Disley (b.1976, Warrington) lives in Liverpool. Disley seeks to expose the thought processes of the artist when wrestling with form and colour. She uses her own body to animate the crude painted objects and surfaces that she creates.

Daniel Fogarty (b.1987, Stockport) lives in Manchester and Rotterdam, The Netherlands. Fogarty applies the format of ‘the whim’ in his practice. He sees his sculptural and collage work as being close to publishing, in which paintings and thoughts of the day are as changeable and estranged as the weather, and as normal as the Cheerio’s he ate this morning.

Harry Meadley (b.1990, Leeds) lives in Leeds. Meadley takes a varied approach to art making, with a wide-ranging and interconnected body of work that appears to intentionally span all mediums.

Stephen Sheehan (b.1986, Birkenhead) lives in Birkenhead. Sheehan is interested in the beautiful, fragile, and transient nature of life. He explores this interest through performative actions and film. Sheehan’s work is usually produced in open spaces accessible to the passing public. This gives his work a sense of fragility and vulnerability – at any moment it may be disturbed by human curiosity.

Liverpool Biennial presents a free festival of newly commissioned contemporary art from around the world. Liverpool Biennial 2016 will unfold through the landscape of the city. It is organised as a story narrated in several episodes: fictional worlds sited in galleries, museums, pubs, unused spaces, stations, hotels, shops and supermarkets.