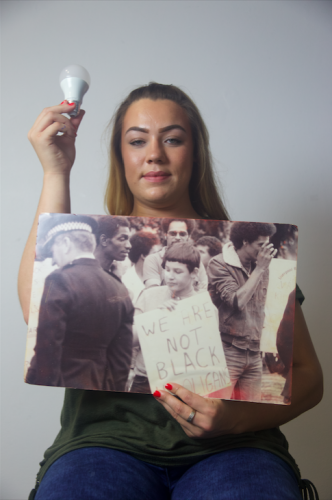 To mark the 50th anniversary of the 1968 Race Relations Act, photographic artist and educator Scarlett Crawford has been commissioned by UK Parliament to work with communities in Liverpool and across the country. At Bluecoat, Scarlett has collaborated with young people from the Greenhouse Project and Liverpool Community Spirit’s Multi-Faith Youth Council to create artworks which explore the impact of race relations legislation on their lives. The resulting exhibition of photographs, a soundscape and film, created in summer workshops at Bluecoat, will also be shown at the Houses of Parliament in 2019, alongside work from the rest of the UK.

Scarlett Crawford (b. 1982) is a British artist who is passionate about equality and diversity in the arts and education, and has worked as an artist and educator within the community and creative industries for the past ten years. Her photographic work examines the semiotics of race and class using lens-based media to create images that portray narratives of the underrepresented, without reinforcing their position as ‘Other’. She juxtaposes object, person and place in participatory constructed portraiture that is both jarring and surreal, blurring the lines between fact and fiction, stage and document. As a qualified teacher, she has worked in schools, pupil referral units and youth offending services. As an artist she has worked with organisations such as Photofusion and the Dulwich Picture Gallery. Scarlett Crawford has been appointed by the UK Parliament for a new project entitled First Waves: Exploring the impact of race relations legislation in the UK. Over the course of her residency, she will hold workshops with six partner organisations across the country, including Bluecoat, to create artworks with local people which explore and celebrate the 1965, 1968 and 1976 Race Relations Acts. The project is timed to coincide with the 50th anniversary of the 1968 Race Relations Act. Visit scarlettcrawford.com