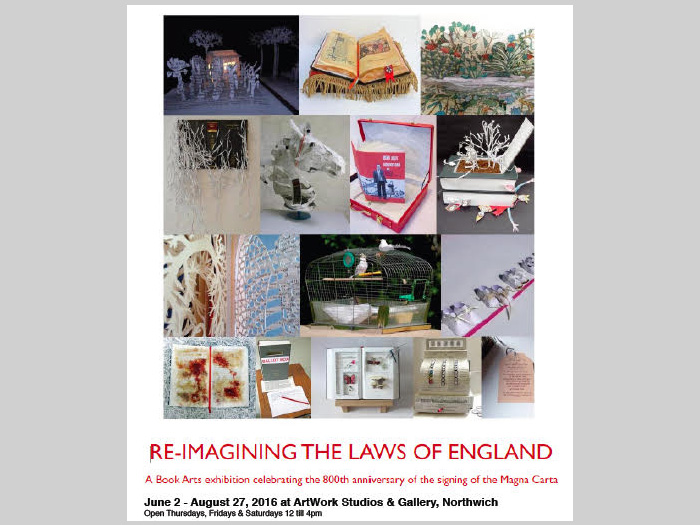 A Book Arts celebration of the 800th anniversary of Magna Carta

Artists from across the UK are participating in the Sidney Nolan Trust’s celebration of the 800th anniversary of the Magna Carta (1215).

A set of ‘Halsbury’s Statutes’, the accepted authoritative texts for statute law (Acts of Parliament) of England and Wales, was donated to the Trust by a local court service whose staff now use online reference. The 27 volumes were destined to be pulped had the Trust not taken them.

Each volume has been transformed into a work of art exploring themes related to topics covered in the particular volume as well as ideas around legislation and society. The unusual collection includes beautiful works of art, powerful indictments of abuses of human rights and humorous takes on law, power and politics.

Anne Rook took inspiration from the flora and fauna found at the time of King John for her volume. Jane Tudge’s illuminated garden shed is a metaphor for how a nation grows from the foundation of a set of published laws. Sharon Hall Shipp’s paper ribbons references the ‘red tape’ of bureaucracy. Vivienne Sole’s appealing tiny paper shoes that ‘toe the line’ – or don’t – each denote a different aspect of laws that affect children. Linda Toigo cut the pages of her volume into human lungs – every time the book is opened and closed it breathes in and out 800 years of history. Mellie Lane’s birdcage depicts King John as a bird trapped in a cage by his barons. Rachel Rickett’s remarkable Nine O’Clock Horse references folklore around bedtime rules.

Since opening at the Trust’s home, The Rodd in the Welsh Marches, in 2015, the exhibition is touring to venues nationally through 2016 and 2017.

The Sidney Nolan Trust was established by the eminent Australian artist Sir Sidney Nolan in 1985 at his home, The Rodd, in the Welsh Marches. The Trust’s programme encompasses exhibitions of the work of Sidney Nolan, artist residencies and performances as well as a learning programme encompassing master classes, courses and outreach workshops for members of deprived urban and rural communities. 2017 marks the centenary of Nolan’s birth. www.sidneynolantrust.org

Artwork Studios - Reimagining the Laws of England, Book Art
1 of 4