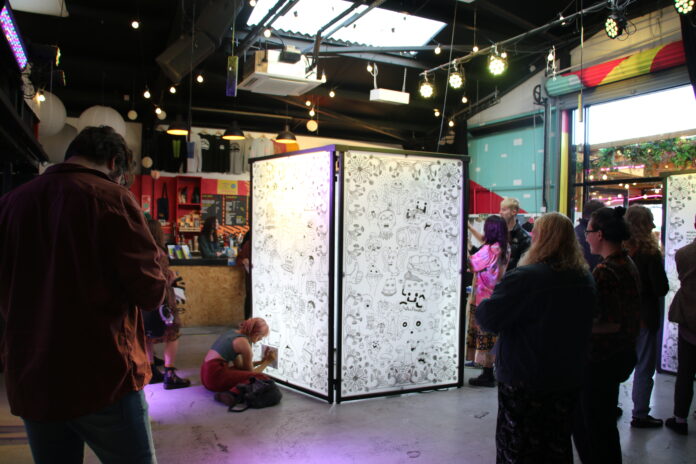 When you woke up today, did you see the positives ahead of you, or worry about the next step you had to take? Do you look on the bright side, or get bogged down by the stuff on the other side? With so much exposure to extreme emotions, we’re increasingly susceptible to generalisations to get us through. A quick google on improving stress levels tells you to drink green tea, assert yourself, and rink more liquids.

Jon Edgley’s solo show, On the Bright Side, questions 21st century positivity, and in a really immediate way gives its users a chance to do something physical as a distraction.
Like the artist says in the exhibition statement, the answer to life isn’t always: live, laugh, love.

Once in a while, it’s just: stop for a bit. And the installation at Convenience Gallery is a chance to do that.

On the Bright Side is a single installation rather than an exhibition. It’s bold, and immediate, and above everything else, a perfectly realised idea.

By the time you read this the show is over, but it’s part of a wider programme at Convenience Gallery. In Cahoots is a mash of ten exhibitions, a series of walks, talks and film screenings, all produced by Andrew Shaw and Ryan Gauge who have built the gallery into a space where you expect to be re-taught how independent spaces can work.

The shows are polished, and considered. Jon Edgley’s installation is precise. It understands every potential type of engagement, and asks its audience to follow a simple set of instructions.

The result is a gentle activity which gives you space to engage. Pick up a pencil, pick up some paper, trace images from the 360 degree, 8ft lightbox, and you’re done. You’ve got a print. Cheap, easy, engaging, sorted.

Worth mentioning in this article is the nature of print. We’re so used to print workshops involving screens and vacuum tables, or presses, rollers, and shelves full of inks. But when you strip print back to its utter basics, it is mark making and repetition. I’d never really considered that until this show, and it was a hugely relaxing exercise.

I know there’s a chance I’m over simplifying, but there’s a purity to the process of this work that matches the exhibition’s motivations perfectly. The show is a questioning of positivity, how we use it, how we need it, how we misuse it, or just misunderstand it and whether, sometimes, “Look on the bright side” isn’t the right advice.

Whatever the answer to the bigger questions Edgley is asking, I left feeling a lot more positive than when I went in.

Words, Patrick Kirk-Smith
Jon Edgley’s On The Bright Side has ended, but the In Cahoots programme continues at Convenience Gallery until May 2022