Home Williamson: …To Have and to Hold

Williamson: …To Have and to Hold 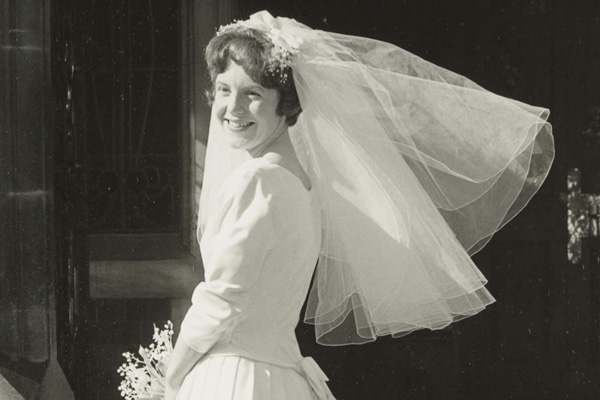 Williamson: …To Have and to Hold

..TO HAVE AND TO HOLD

The Williamson Art Gallery in Birkenhead will be celebrating romance this autumn when it hosts a display of wedding dresses.

The dresses displayed belong to members of Heswall U3A, who have also contributed family photographs, invitations and treasured tokens of their very special days ranging from the 1920s to the present day.

The University of the Third Age is a national organisation for men and women who are retired or semi-retired and wish to continue learning and sharing knowledge. U3A branches are operationally independent and run by the voluntary efforts of their members. The exhibition has been organised by Heswall U3A and will be featured in the Williamson’s local history gallery.

One of the dresses featured in the exhibition will be from Karen Rees, Joint Chair Activities at Heswall U3A. Karen, nee’ Brown married Steven James Rees in 1978 at Ebenezer United Reformed church, Chatham, Kent.

Karen and Steve met in 1977 at a mutual friend’s wedding. The wedding of Karen’s primary school friend and Steve’s engineering apprentice housemate was in Kent where Karen lived. Steve lived in Liverpool. He came to Kent on his motorbike and Karen was asked to take him to the wedding in her mini. Steve was rude about her driving, but as they were both on their own, they spent the day together.

The following year was spent commuting between Liverpool and Chatham in Kent, Steve – on his motorbike and Karen traveling by train. Steve proposed six weeks later. They became engaged in November 1977, bought a house in Irby in January 1978, which Steve moved into in April while Karen organised the wedding in Kent for July. Steve at that time was, and continued to be, a teacher at Calday Grange Grammar School and Karen started work for Cheshire County Council after the wedding. At the time of their marriage Karen was a social worker.

Karen’s dress and veil was made by her mother from a Vogue Pattern (This along with other patterns will be in the exhibition). The material is white slub satin. Steve’s suit (which will also be on show) was made to measure from Burtons in Birkenhead. Karen’s veil was recently worn by her daughter Vivien, who married Michael Williams at Walton Hall in Warrington in May 2015.

Alison Bailey Smith of the Friends of the Williamson said of the exhibition:

“It is a wonderful way to connect with a pivotal moment in the lives of the contributors and I am sure will touch the hearts of many who will view the exhibition. I am sure the display will bring back many memories for our visitors, we hope to hear of many stories of special dresses, something old and something new during the exhibition and to capture stories of local weddings”.

Members of the public can keep up to date with all the activities at the Williamson Art Gallery and Birkenhead Priory following The Friends of the Williamson’s facebook page, Twitter and on their blog.