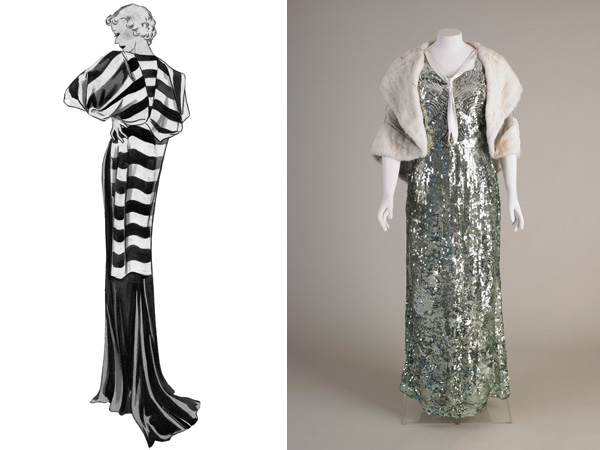 The display of 20 outfits from National Museums Liverpool’s costume collection reveals how the glitz and glamour of Hollywood was reflected in the fashions of the period. In contrast to the loose, flapper-style silhouettes of the previous decade, women embraced more fitted styles with longer hemlines.

An evening dress that belonged to the daughter of the Chief Officer on the Titanic will be on show, along with a pearl and diamanté encrusted silk wedding dress bought from Brown’s of Chester and garments purchased from Liverpool department stores George Henry Lee & Co. and Owen Owen Ltd.

Pauline Rushton, Curator of Costume and Textiles at National Museums Liverpool, said: “Putting on the Glitz showcases the sort of stylish outfits that wouldn’t look out of place in a Hollywood film. The sumptuous textiles, elegant lines and subtle embellishments really bring to mind the glamour of silver screen sirens such as Bette Davis and Joan Crawford.

“The outfits are also representative of a period of rising social aspirations. Much as we do today, people chose to demonstrate their affluence and taste through their choice of clothing.”

Putting on the Glitz will also display a set of striking fashion illustrations which were designed for George Henry Lee & Co. by local illustrator Mrs Winifred Aileen Brown (1907-1993). Born in Wallasey, Mrs Brown worked as a fashion illustrator for the Basnett Street department store, later purchased by John Lewis, in the 1930s.

The illustrations have been loaned to National Museums Liverpool by Mrs Brown’s daughter, Mrs Gillian Harrand, who learned that her mother would sketch the fashions as they were paraded by models in the store. The sketches would then appear in the evening newspapers, advertising the goods to readers.

The exhibition also features a wonderful selection of accessories including shoes, stoles, handbags and hats, some of which were purchased by Liverpool doctor’s wife and renowned shopper Mrs Emily Tinne (1887-1966).