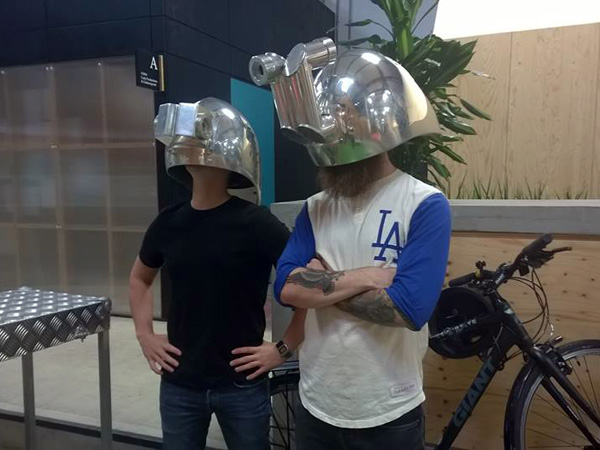 Wearable sculptures will be free to try in Liverpool city centre during the Liverpool Irish Festival, letting you see through the eyes of an animal.

Have you ever wanted to look left and right as a hammerhead shark, swimming through the sea? How about experiencing the exceptional peripheral vision of a horse or, like a chameleon, be able to see forward and backwards at the same time? During this October’s Liverpool Irish Festival, five wearable sculptures will be available on the city’s streets allowing those who wear them to be able to see through the eyes of an animal, both real and imaginary.

The Meta-Perceptual Helmets, which have never been seen in the UK, have been created by Irish artists Anne Cleary and Denis Connolly. Inspired by early 20th Century experiments in perceptual adaptation each helmet offers the wearer a different view, or the sight experience and visual perception of a different animal; the enhanced stereoscopic view of the hammerhead shark, the lateral-vision of the horse or the highly visually-oriented chameleon. As well as real animals, one special helmet offers a glimpse into the perception of animals that are imaginary or appear in literature; the Cheshire Cat Helmet allows you to see the world normally, but with the lingering effect of dominating visual information, like a smile or eyes.

During the Festival they can be seen and worn at:

Visual perception is closely aligned with evolution. The chameleon, for example, uses its visual system to sense prey, identify a mate and to avoid a predator.

The outstanding stereo-vision of the hammerhead means it has a 360 degree field in all directions, and many scientists believe it has the best “all round vision” of the animal kingdom. But what about the human? Why is our vision so limited?

Why is our depth perception so poor and why can’t our eyes offer us different views of the world? With the Meta-Perceptual Helmets, people will be able to see an alternative, experience the world through different species eyes and reflect on their own vision. The wearer becomes a hybrid, part human, part machine, part animal as well as part of an artwork.

Anne Cleary and Denis Connolly, award-winning artists from Ireland who now live in Paris, worked with the optometrics department at the University of Montreal to get advice on the design of the helmets and a master coach builder, Neil Mckenzie, on the hand-crafted construction. The horse helmet, for example, has two ocular lenses and two pentaprisms and lets you think you can turn your eye all the way around. The work was first shown at the Natural History Museum of Ireland and the Kilkenny Arts Festival.