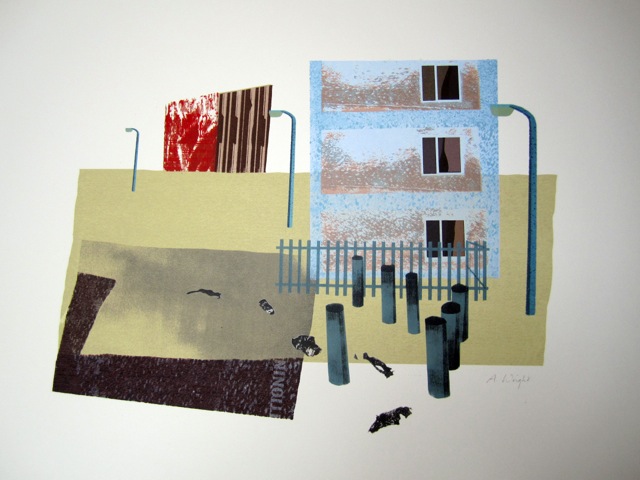 View Two’s first show of 2017 looks at the Edge of the City, Angela Wright

Artist Angela Wright, as a teacher and lecturer, has used art to help hundreds of young Merseysiders to build a future.

It has taken her to job creation training schemes in Kirkby and Huyton and the Foundation course at the City of Liverpool College.

Along the way it has also taken Wright onto a journey into the edge of the city.

Her collection of paintings and prints reflect that journey in her solo exhibition at Liverpool independent gallery, View Two, in Mathew Street.

Her works will generate different interpretations in different people, such are the messages within the paintings.

“When I lived and worked in Kirkby and Huyton I got a real feel for the place, examining the post-war architecture and observing the people.  It’s not illustrational but my own impressions of what I saw,” she says.

“I would take young people into public spaces as part of a job creation project, to paint murals in places like youth clubs. I watched as they put a lot of thought and design into their work. They were very lively kids.”

Angela Wright also admits to a fascination of the things that can be seen at the edge of the city, looking at the backs of the shops instead of the fronts, and capturing those images.”

Her work has been shown at the Bluecoat, the University Senate House, the Bridewell Gallery and there was a residency at the Walker.

Retiring from full time teaching has given Wright the breathing space she needs to devote time to her first love, being an artist.

“I’m doing more printmaking these days. It always surprises me how they turn out,” she says. It has given her the chance to take an ever closer look at the world.

“I called the exhibition the Edge of the City because things that are often not seen as attractive or beautiful are overlooked.  But they deserve to be closely looked at.

“I originally came to Liverpool,  via Leeds, from London and things are not completely different in each city.”

“Some people will see my work as a celebration, others as a lament, “ added Wright.

These days she can be found gazing her artistic eye over the old New Royal Hospital, destined to be demolished when the new New Royal is finished.

She’s delighted that the old boiler house, very Corbusian in style, will survive the bulldozers. But she admits there are other parts of the old Royal she will miss.

Her “edge of the city” eyes see things that many people, for one reason or another, have not been able to appreciate/

Edge of the City

“My ideas come from life at the edge of the city, the patterns, shapes, and spaces that are part of our ordinary everyday lives.”