Victoria Gallery & Museum: Liverpool Biennial 2018: Beautiful World Where Are You? 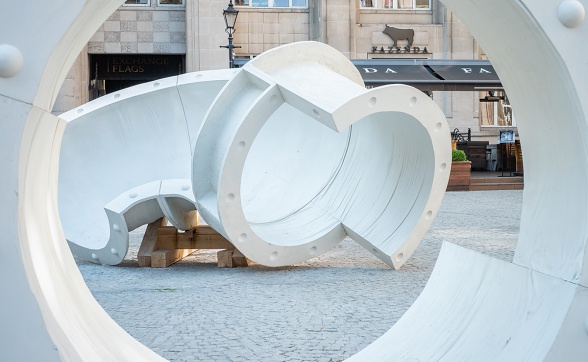 Victoria Gallery & Museum: Liverpool Biennial 2018: Beautiful World Where Are You?

The building that houses the Victoria Gallery & Museum was designed by architect Alfred Waterhouse and opened in 1892. Works by contemporary artists span several floors, where permanent collections and temporary displays can also be found.

Francis Alÿs presents a selection of postcard-size paintings from the 1980s to today under the title Age Piece. Executed in the tradition of classic plein air painting, these works allude to the condition of global tourism in the contemporary art scene. Many of the paintings were done while scouting new locations for future film projects, often in conflict zones such as Israel and Palestine, Afghanistan and Iraq.

Joseph Grigely’s series Songs without Words is based on newspaper images of singers and musicians. The works explore the representation and communication of sound. Taken from the New York Times, the series features images of celebrities from the music world such as the opera singer Andrea Bocelli or the American singer and actor Eartha Kitt. By removing the captions accompanying the images, Grigely points to the significance of contextual information. Without the captions, the singers’ poses concentrate our attention on their ambiguity, as if we are watching the world with the sound turned off.

Silke Otto-Knapp’s paintings can be found here, as well as at Bluecoat. An artist’s book, produced in collaboration with Stuart Bertolotti-Bailey, accompanies the display.

People of No Consequence (2016) by Aslan Gaisumov documents the gathering of a group of elderly men and women, all survivors of the 1944 Soviet deportation of the Chechen and Ingush nations to Central Asia. In this powerful film, the group faces the camera, addressing viewers directly as they enter the building’s Tate Hall.

In Tate Hall, Holly Hendry presents a selection of floor-based sculptures. The works are formed from multi-layered materials including jesmonite, cement and oak, each embedded with foreign objects which reference the artist’s visit to Philadelphia’s Mütter Museum – an institution of medical history and oddities.

Taus Makhacheva interrogates notions relating to cultural authenticity and assimilation following the Sovietisation of Dagestan. Her video piece Tightrope (2015) is a complex work that plays on the delicate relationships between art history, politics, past and contemporary culture.

A selection of objects and collections are highlighted to visitors as part of Worlds within worlds, alongside a display of anatomical models of plants from World Museum.

Victoria Gallery & Museum is a Grade II listed building designed by Alfred Waterhouse, which has been a central part of university life for over a century. Opened in 2008 by HRH The Princess Royal as a celebration of Liverpool’s year as European Capital of Culture, the building was carefully renovated and transformed into a public venue. The refurbishment included the Leggate Theatre, which now hosts regular student and public lectures, wedding ceremonies and concerts.