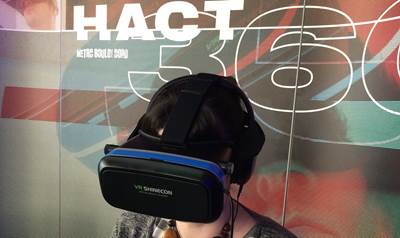 Digital Theatre takes over Unity Theatre as Metro Boulot Dodo returns to Liverpool with Call Me When You Get Here and HACT 360.

Liverpudlians up and down the region are currently glued to their smart phones in the latest summer craze, on the hunt for digital creatures with special powers, whilst at Unity Theatre,  award winning theatre company Metro-Boulot-Dodo’s (who amazed Liverpool with their stunning illumination Out of the Darkness at the Bombed Out Church) return to Liverpool to offer a completely different immersive digital experience all together. HACT is their latest adventure to offer audiences On Demand Theatre. Installed at The Unity from today at 7pm until 23rd July audiences will be able to experience two digital theatre productions.

Call ME When You Get Here will take you on a mysterious beacon activated trail around the Unity as four intriguing installations trigger the story of a woman who failed to arrive at the theatre.

HACT 360 is an immersive experience as the audience suddenly finds themselves centre stage. The public are invited to wear a VR headset and choose from a selection of short plays which have been filmed on a 360 camera. HACT 360 promises to deliver the best seat in the house.

“We’ve always been interested in offering theatres an on-demand experience, so that the building itself becomes the stage. The two plays staged at the Unity this weekend will be presented at Edinburgh Digital Entertainment Festival in August so this is Liverpool’s chance to catch the latest digital shows alongside some great comedy and theatre. Just don’t forget to bring your smartphone!”