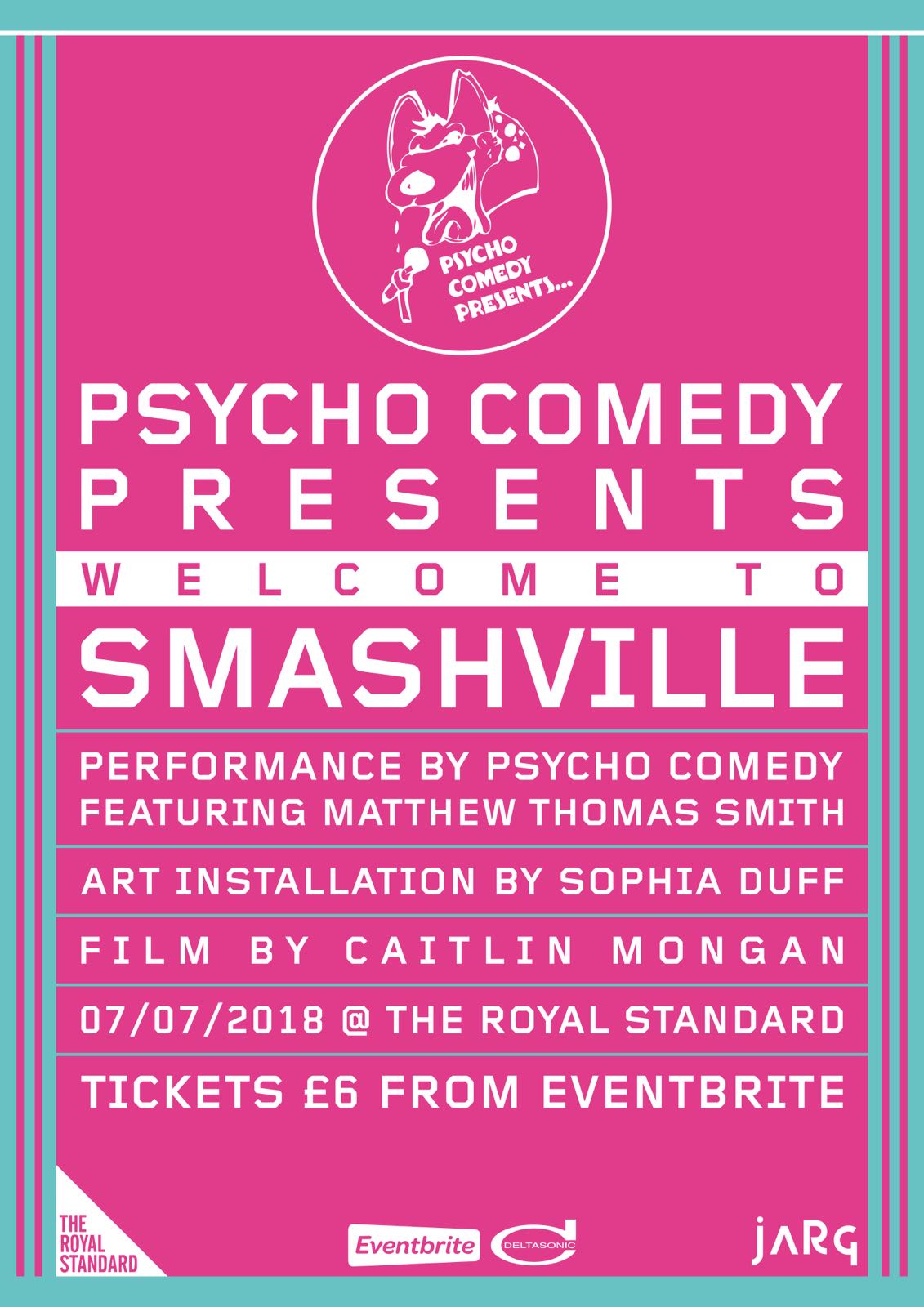 Psycho Comedy Presents: Welcome to Smashville will provide and insight/introduction in to the surreal world of Psycho Comedy. Taking place at The Royal Standard in the Northern Lights Complex, Cains Brewery Village, the night will showcase both their multi-disciplinary creative output and artistic concept through:

The night will also include the first ever screening of the Psycho Comedy documentary, directed by Caitlin Mongan.

An art instillation from Sophia Duff will further explain the concept.

Their work – which encapsulates music, visual art, poetry and film – has all been created with the Psycho Comedy concept in mind. All elements of the event interconnect to coalesce into one entity: Psycho Comedy.

Advanced tickets are priced at £6 and can be purchased from https://www.eventbrite.com/e/psycho-comedy-presents-welcome-to-smashville-tickets-46300831032?aff=es2

Tickets are limited and advanced booking is advised.

Psycho Comedy translates as a schizophrenic acquaintance of myself – Shaun Powell. Delving in and out of two mindsets and ways of life; the debauched and the candid. The tracks are stories that derive from personal episodes since the of age 16 to the present day.

The conceptual town of ‘Smashville’ is the scene for the unhinged happenings where everything is immoral, a parallel land to the perceived morality of our own. When it arises from the immoral, the moral side of its inhabitants’ psyche searches for purity and calm, only to inevitably return to the debauched and chaotic.

The Psycho Comedy dog print (logo) is known as ‘Varmint’, which represents the ugly side of the personality than reigns in ‘Smashville’. Listen to the tracks and you will hear a conversation between the opposing sides of the personality. The moral and the immoral. The Apollonian and the Dionysian. Almost like a battle.

Influences derive from New York artists, musicians and poets (Patti Smith, Lou Reed, Johnny Thunders, Television etc) as they always seem to have had an intoxicating yet sincere struggle.

INTOXICATING/SINCERE. Can you see the two mind sets and the influence settling in?

The name Psycho Comedy originates from the Comic Strip Presents, with powerful, deranged humour being a reference point to the ongoing satire within the tracks. If you explore these tracks you will find elements of humour, ridicule and parody.

Though starting primarily as a band, we have evolved as a collective encapsulating music, performance, poetry and visual art. Our work explores the real and surreal nature of Psycho Comedy and Smashville. The dual, yet entwined, natures of the candid, the fantastical, the debauched, the virtuous, the hedonistic, the disciplined, the moral, the immoral, the humorous and the serious.

Psycho Comedy are a Liverpool based (born and raised) band and art collective who blend music, performance, spoken word and visual art. Their work is created from the perspective of the Psycho Comedy concept as conceived by founder, vocalist and guitarist Shaun Powell.

Though already a fixture of the Liverpool music scene Psycho Comedy: Welcome to Smashville offers a closer look at the breadth, and eclecticism of their work and a greater insight in to their concept and artistic vison.

ABOUT THE ROYAL STANDARD

The Royal Standard (TRS) is an artist-led gallery, studio complex and registered charity based in Liverpool. As an organisation, we are dedicated to fostering opportunities for the most outstanding recent graduates and emerging artists through providing affordable studio space, free public exhibitions, events and training. We deliver a public programme and monthly workshop programme for our membership simultaneously, which includes exhibitions, workshops, residencies, social meets, screenings, studio exchanges and group critiques.

Established in 2006, TRS was founded in response to the need for a new organisation that could operate between grassroots initiatives and the more established arts institutions in the North West. Over 12 years, we have worked with over 300 artists and delivered over 70 unique exhibitions and events and grown to support 45 artists based in studios, as well as 5 project spaces and its own gallery. This growth was in part enabled by successfully relocating TRS into new larger more central premises in Baltic Creative’s Northern Lights complex in October 2016. TRS also works with partners across the North West. We have long standing partnerships with Liverpool Biennial, Bluecoat, FACT, New Contemporaries, Newbridge Projects, Liverpool John Moores University, and critical writing journal and critical writing journal The Double Negative.