Home The Playhouse Theatre: Liverpool Biennial 2018: Beautiful World Where Are You?

The Playhouse Theatre: Liverpool Biennial 2018: Beautiful World Where Are You? 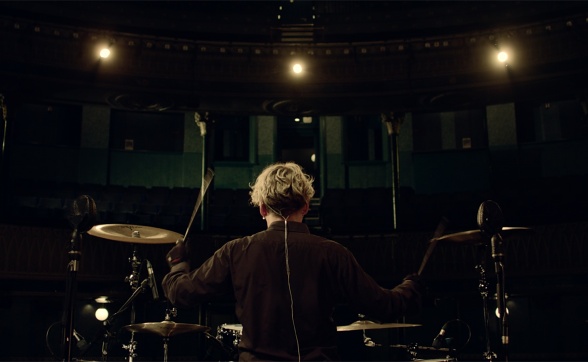 The Playhouse Theatre: Liverpool Biennial 2018: Beautiful World Where Are You?

Ari Benjamin Meyers has created a series of musical compositions that form the basis for film portraits of four musicians from Liverpool, or with musical ties to the city: Bette Bright (Deaf School), Budgie (Siouxsie and the Banshees), Ken Owen (Carcass) and Louisa Roach (She Drew The Gun). The films reference the subjects’ personal histories and tell Liverpool’s musical history, representing its major musical movements while at the same time relating back to the city’s industrial past. This is the artist’s first film-based work and is presented on the stage of the Playhouse theatre. The four films are played back with varying amounts of overlap to create a meta-composition and a dialogue between the performers.

Across the first floor bar, Ei Arakawa presents a new version of his project Performance Peoplefor Liverpool. Using the astrological natal charts of personified performance artworks, Arakawa presents an analysis of seminal works including Yoko Ono’s Cut Piece, Tony Conrad’s 7360 Sukiyaki and Andrea Fraser’s May I Help You? on an LED screen, posters and audio.

Reetu Sattar’s film Harano Sur (Lost Tune) takes over the theatre’s rehearsal studio. It focuses on the harmonium, a musical instrument that is tightly integrated into the traditional culture of Bangladesh but is in danger of disappearing. The film documents a performance that took place earlier in the year at Dhaka Art Summit and brought together many performers, each playing three of the seven notes of the harmonium. The artist uses the sustained droning sounds as a way to explore the violence and social upheaval that have recently affected Bangladesh and as a wider metaphor for issues of cultural control, diasporas and partition. By playing a sustained note, the performers make the powerful statement that they and their traditions are here to stay.

In the first-floor bar, Iacopo Seri is creating a new work exploring drunkenness and the effect of altered states in relation to forms of reality and artistic production. The project takes the form of a communal workshop over the opening weekend of the Biennial, with transcriptions from the collective discussion subsequently published in a zine.

Reetu Sattar is commissioned by Liverpool Biennial and Dhaka Art Summit, as part of the New North and South.

The Playhouse opened as the Star Theatre of Varieties in 1866, replacing an earlier venue, the Star Concert Hall. It was converted to a theatre in 1911 with the establishment of the Liverpool Repertory Theatre – one of the UK’s first – and was renamed Liverpool Playhouse in 1916. The Grade II listed building joined forces with the Everyman in 1999, uniting the two theatres in a commitment to brilliant and humane theatre that responds to its time and place.