Home Tate Liverpool: Liverpool Biennial 2018: Beautiful World Where Are You?

Tate Liverpool: Liverpool Biennial 2018: Beautiful World Where Are You? 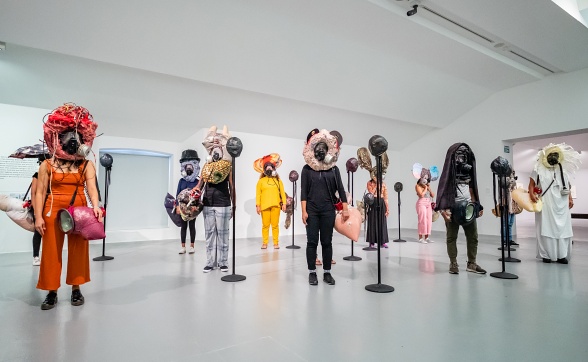 Tate Liverpool: Liverpool Biennial 2018: Beautiful World Where Are You?

Haegue Yang has created an immersive environment for her sculpture series The Intermediates (2015-ongoing) in the Wolfson Gallery. Made from artificial woven straw, The Intermediates allude to both traditional arts and crafts techniques and modern industrial production methods. Representing figures and sites from folk tales and ancient traditions, they question definitions of ‘paganism’. Yang’s environment for these works includes recordings of wildlife taken from the British Library’s sound collection, a wallpaper juxtaposing pagan traditions and modern history, and suspended ribbons that evoke folk traditions such as maypole dancing. Her multisensory, hybrid environments suggest fleeting connotations of time, place, figures and experiences that connect ‘folk’ traditions and contemporary culture.

On the gallery’s top floor, artists address the complex interactions of race, nation and culture in settler societies. The presentation brings to the fore work from America, Australia and Canada that takes up the often violent legacies of colonisation while simultaneously revealing the undercurrents of strength and resilience that have been essential to survival for subaltern populations around the globe.

Dale Harding is a descendent of the Bidjara, Ghungalu and Garingbal peoples of Central Queensland, Australia. He has created a new wall-based work for the gallery that is inspired by rock art sites in Queensland and uses a stencil technique practised by the artist’s ancestors. The predominant material is Reckitt’s Blue, an ultramarine pigment and optical whitener with strong symbolic power. Produced in the UK and used in Liverpool’s public washhouses, it travelled along the colonial frontier to Africa and Australia, where Harding’s mother used it in her job at a laundry. This new work tells stories of female labour in the UK and Australia, connecting histories from different parts of the globe.

Kevin Beasley’s Your face is / is not enough (2016) is a sculptural and performance-based installation consisting of twelve repurposed NATO-issued gas masks stabilised by microphone stands and paired with altered megaphones. Encased in pigmented foam pierced with adornments that range from guinea fowl feathers to glass beads, and further altered by sculptural extensions made up of articles of clothing, each mask differs from the next. Transforming symbols of control, Beasley evokes gestures of empowerment and agency within individual and collective acts of protest, power and protection. This work was acquired by Tate in 2016 with the support of the Tate Americas Foundation, and this marks the first presentation at one of its sites.

Brian Jungen carves ‘feathers’ from the soles of Nike trainers to create a series of sculptures that resemble Cheyenne-style war bonnets. These headdresses, familiar from countless Westerns, address a long history of conflict and the lingering effects of colonisation. They signify the strength and pride of indigenous people today.

The sculptural works of Duane Linklater consider the notions of cultural loss, social amnesia and identity from the perspective of the indigenous peoples in Canada. Commenting on the economy of the fur trade, they suggest that animals, even in death, might retain their spirits or selfhood beyond the value they possess as commodities. By showing these works for the first time outside of Canada, the artist invites us to explore indigenous traditions and bodies within institutional settings. In the context of a gallery display, the works reflect Europe’s own colonialist history, in which the natural resources and rights of indigenous peoples were heavily exploited.

Annie Pootoogook’s drawings serve as a diary of the artist’s life and are indicative of the sulijuk (‘true’ or ‘real’) tradition. Pootoogook worked with a singular clarity of vision, often depicting poignant moments of emotion or violence in intimate domestic environments. Immediate and direct in style, her drawings chronicle the everyday events of modern Inuit life in the small community of Kinngait as she saw it. Her realism is at odds with the traditional outdoor scenes that people have come to expect from Inuit art.

Stemming from the artist’s anxiety about the survival of Canada as a nation faced with its American neighbour to the south, Rat Life and Diet in North America (1968) is a political film by Joyce Wieland. The work tells the story of a group of political prisoners, imagined as gerbils, who are held in the United States. Escaping their oppressors, a role taken on by cats, the gerbils cross the border into Canada where they will live in peace growing organic foods.

Dale Harding is commissioned by Liverpool Biennial and the Institute of Modern Art, Brisbane. Annie Pootoogook is curated by Dr Nancy Campbell.

Tate Liverpool is the UK’s most visited gallery of modern art outside of London and is home to the national collection of modern and contemporary art. Visitors enjoy world-class exhibitions and free displays, as well as magnificent views of the building and its surroundings. The gallery is housed within a Grade I listed warehouse and is situated at the historic Albert Dock, the vibrant heart of the UNESCO designated World Heritage waterfront.