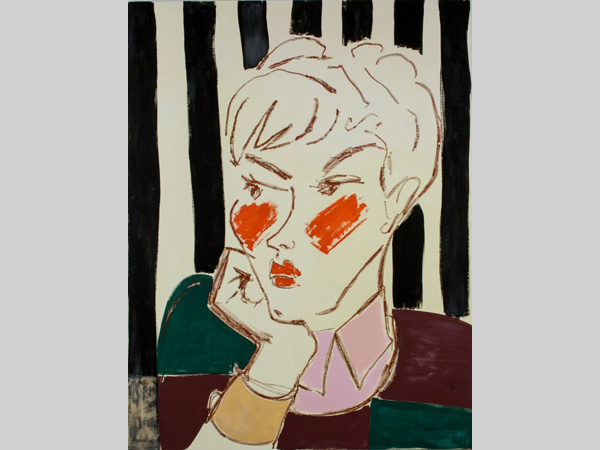 Tate Liverpool presents the first museum exhibition by New York-based painter Ella Kruglyanskaya (b. 1978, Latvia). Featuring drawings and paintings that together survey the past ten years of the artist’s work, the exhibition will also debut a selection of new artworks made in 2016.

Her practice engages with many often-overlooked styles, techniques and formal concerns from the history of painting, such as her use of egg tempera. A combination of coloured pigments and egg yolk, this ancient painting medium is more often associated with medieval and early renaissance panel painting than contemporary art and gives Kruglyanskaya’s work a lush, luxurious finish. Working in a style that combines the graphic and the painterly, Kruglyanskaya embraces a wide range of influences from ancient Etruscan wall painting and German expressionism to film and popular culture of the 1950s and 1960s. Her resulting compositions are tightly framed, shallow spaces that suggest constant interplay between the realms of drawing, painting and cinematography.

The female body in Kruglyanskaya’s work is strong and assured: fashion and textiles play an important role in its depiction, with her subjects always pointedly clothed. In this world, male presence is reduced to a distorted bodily fragment or cartoonish silhouette, like the cowering figure in Pursuit with Purse 2013. These fictional women are characterised honestly and on the artist’s own terms, subverting many traditional expectations of how the female body is to be represented.

The exhibition is curated by Stephanie Straine, Curator, Tate Liverpool.