St George’s Hall: Liverpool Biennial 2018: Beautiful World Where Are You? 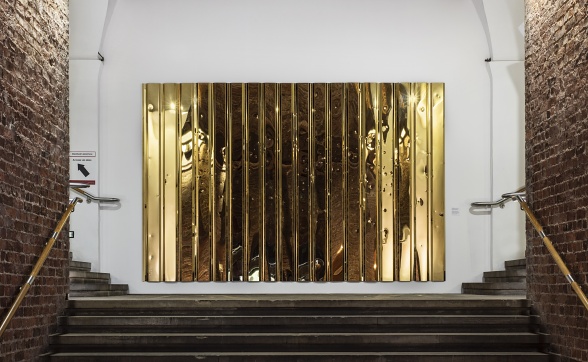 St George’s Hall: Liverpool Biennial 2018: Beautiful World Where Are You?

The Grade I listed St George’s Hall is regarded as one of the finest Neoclassical buildings in the world and dates back to 1854. Making their way through underground spaces, visitors encounter several artists’ work presented within the building’s original prison cells and courtroom.

A reflective, gold-plated work by Chou Yu-Cheng interrogates the act of protest, showing indentations made by the public when it was first presented.

Joyce Wieland’s Sailboat (1967) is a short film that depicts yachts moving across the water intercut with the exaggerated sound of roaring waves and the word ‘sailboat’. The parade of endless similar looking boats, as well as the horizontal division of the picture frame by the water, gives the film an innocent child-like quality, like a simple painting. The distant passing sailboats hint at themes of desire, loss and yearning for an ideal of perfection that is always just out of reach.

Reenactment of Heaven, Inci Eviner’s newly commissioned film, reflects on ideas of heaven, religion and authority. Eviner specifically addresses the place of women in heaven, rejecting the role consigned to women in societies dominated by the male gaze. She also explores the rhetoric connected to religion and powerful authorities. For her film, Eviner collaborated with a female singer and performer, presenting women as self-determined and active. Based on drawings and a multi-layered choreography, the film blurs the borders between reality and fiction, using masks, stage design and symbolic props.

Tracing the struggles and turbulent histories of the Chechen people, Aslan Gaisumov’s most recent work Keicheyuhea (2017) follows the artist’s grandmother as she returns to her lost homeland in the mountainous scenery of the North Caucasus for the first time since the displacement of her family 73 years earlier.

Lamia Joreige’s three-channel video installation After the River (2016) is part of a project dedicated to the exploration of the river Nahr in Beirut. Unfolding past and present stories associated with the river, Joreige draws a social portrait of a landmark with varying roles in the rapidly changing city. Her video discusses gentrification, waste and current problems in the neighbourhood of the river, whilst touching upon the impact of the multicultural population and redevelopment plans for the area. Through the example of the river, Joreige also reflects on the changing definition of landscape and the notion of border.

Modest Livelihood by Brian Jungen and Duane Linklater was filmed during two hunting trips in Dane-zaa Territory in Northern British Columbia in 2011. The film follows the artists and Jungen’s uncle as they move through the landscape. For Jungen, of Dane-zaa and European ancestry, and Linklater, who is Omaskêko Cree, the ritual of the hunt is a customary practice of ancestral tradition central to their First Nations identity, and is inextricable from the century-old treaty rights of First Nations, which the title of the film references.

Screened in the courtroom at St George’s Hall is Two Meetings and a Funeral (2017), a three-channel film by Naeem Mohaiemen. The work revisits the Cold War-era power struggles between the political coalitions of the Non-Aligned Movement (NAM) and the Organization of Islamic Cooperation (OIC). The project navigates alliances of convenience made during Bangladesh’s fight for UN recognition, as well as parallel decolonisation struggles in Palestine-Israel, the Portuguese colonies and South Africa.

St George’s Hall is regarded as one of the finest Neoclassical buildings in the world. The Grade I listed building contains concert halls and law courts and is recorded in the National Heritage List for England. Having first opened in 1854, today St George’s Hall is a focal point for cultural, community, civic, corporate and performing arts activities.