Home The Royal Standard: And Yet it Moves

The Royal Standard: And Yet it Moves 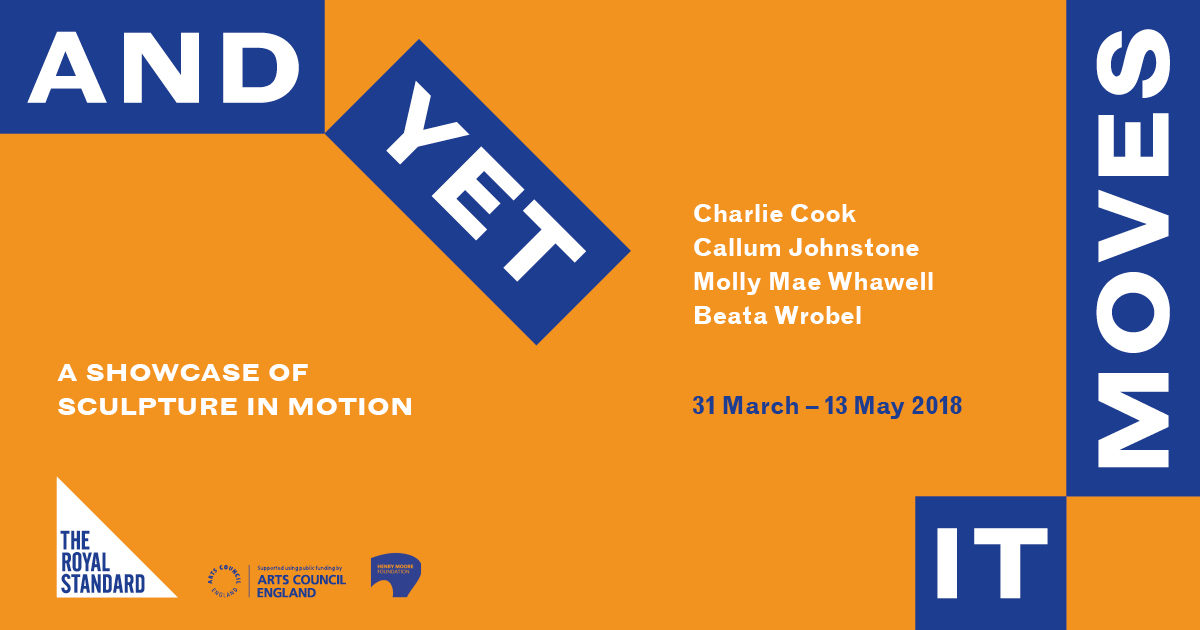 The Royal Standard: And Yet it Moves

And Yet It Moves

The Royal Standard presents And Yet It Moves, an exhibition on sculpture in motion featuring works by Beata Wrobel, Callum Johnstone, Charlie Cook, Molly Mae Whawell

And Yet it Moves is an exhibition showcasing sculptural works by four recent UK BA graduates. It explores non-static sculptural works through investigating sculptures potential to take mobile form by utilising different modes of movement. This will be explored by changes in each piece overtime (Callum Caplan), by utilising the manoeuvrability of the works with the audience (Beata Wrobel), performative sculpture (Molly Mae Whawell) and activated sculpture (Charlie Cook).

The opening day will take place on 31st March between 2pm – 8pm with works being ‘activated’ during this period. Visitors are invited to attend the full day or drop in to suit their schedules. On Thursday 6th April 1pm – 5pm there will be a performance workshop aimed towards families during half term delivered by Naomi Mcalister, a Liverpool based researcher and performance artist, as well as an open discussion evening with exhibiting artists and Bluecoat’s curator Adam Smythe on Thursday 3rd May 6pm – 8pm.

The idea of creating hiding places and spaces to relax, contemplate, sleep or dream derives from my apprehension that the world is moving in the wrong direction. Through the experimental process of making, I connect art, design and architectural ideas to develop a critique of capitalism, including urbanism, consumerism and the educational system. I have noticed quite a disturbing imbalance in the systems of value. We are so busy in our everyday duties, bombarded with advertisements via the Internet, television commercials, or billboard posters that we are forgetting about simple, yet very important things in life and the fundamental values that really shape who we are. My aim is to create an artwork which can help the viewer to get close to these values beyond capitalism. My sculptures are reminiscent of objects, dreams and emotions I had in my childhood. I carefully select these memories, placing them back into my reality by transforming them into objects. I am interested in how we perceive and experience space as artwork.

Beata Wrobel is based in Preston, Lancashire. She graduated from a BA (hons) Art degree in 2017 at University of Central Lancashire and was selected as one of The North West’s Top art graduates in 2017 with the Double Negative.

My practice explores themes of sustainability and the unimagined future. Living in a time of great uncertainty, I aim to question the structures and foundations on which we build our society, and to reimagine them in an unfamiliar way. By challenging the fundamental grounds of society, I hope to present a way in which humanity can progress, with less environmental and socio-political issues. My work treads the line between art and design. With my focus being fixated on finding a solution to a problem, my work is as much art as it is a considered proposal for a resolution to an issue in society.

Callum Johnstone is based in Glasgow, Scotland. Having graduated with a Fine Art BA Honours from Newcastle University in 2017, Callum has gone on to be shortlisted for the Plymouth Contemporaries and the North East Young Sculptor of the Year Award.

My parents named me Charles but decided to call me Charlie, the idea being that when I grew up I may want to take myself more seriously and thus have the option to go by Charles. At 24 I always thought I would be going by Charles, however I have come to realise I don’t want to take myself more seriously. I’m not a Charles yet; I’m still just a Charlie. The ramp holds ninety-eight rocket balloons trapped in just as many wooden pegs, with a car tire suspended at the summit. A younger me used to shake trees and see how many leaves I could shake off- now I’m making ramps and seeing how many balloons I can make lift off.

Charlie Cook currently lives and works in Manchester. He graduated from The Glasgow School of Art in 2016 with a BA (Hons) in Sculpture. Charlies most recent exhibitions include They Had 4 Years at Generator projects, Dundee and X at Blip Blip Blip, leeds.

Molly Mae Whawell graduated with a First Class Honours, BA (Hons) in Fine Art from The Glasgow School of Art in 2016. The underlying concern of Whawell’s work is in the space between the material language of sculpture and embodied ways of knowing. The work invokes languages of the physical and the visceral to tap into something fleeting; that which is not easily understood through written or spoken language. The work is realised through sculpture, installation, choreography, performance, text and film.

And Yet it Moves is kindly supported by Arts Council England and the Henry Moore Institute.