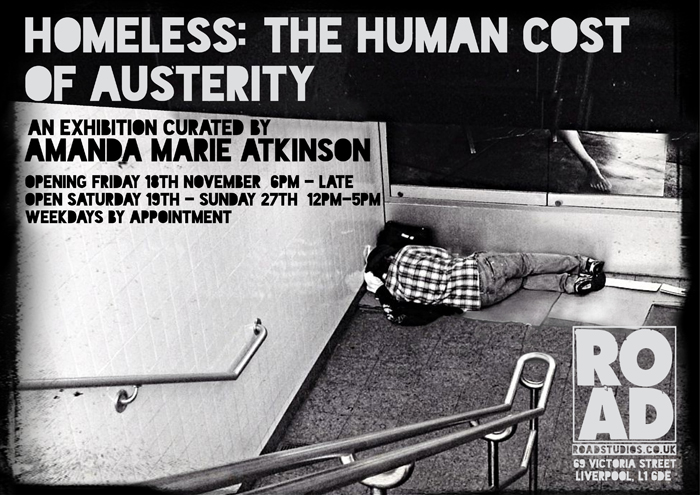 Homeless: the human cost of austerity

This November, ROAD Studios will host an art exhibition curated by resident artist and Senior Researcher (LJMU), Amanda Marie Atkinson. Entitled ‘Homeless: the human cost of austerity’ it aims to draw attention to the issue of homelessness in Liverpool, and beyond, in the context of austerity as an ideologically choice, with human consequences.

The show is timely in light of recent figures showing that all forms of homelessness in the UK have risen, including rough sleeping, the most visible form of homelessness. It is vital that these figures are understood in the context of the Tory austerity programme. Reform/cuts to housing benefit and the squeezing of local authority budgets, the shortage of housing and the expansion of the private landlord sector with unaffordable rent prices, funding cuts to homelessness, mental health and substance use services, and a reduction in the number of hostel/shelter places, have all played major contributing roles to these rising figures. Such figures are just the tip of the ice-burg, and have been predicted to rise in light of further austerity measures.

Homelessness is the human cost of austerity yet research shows that a large proportion of the British public hold misconceptions on the issue of homelessness, with many believing that people who are homeless and living on the streets are there by choice. This could not be further from the truth. Homelessness is the result of a range of structural barriers and life events which occur outside the control of the individuals. It is an outright form of social exclusion and inequality, making those who are affected invisible, ignored and often forgotten.

Compared to the national average, Liverpool has high levels of homelessness. Whilst private developers and landlords move in, buildings stand empty and the budgets of local authority services continue to be squeezed, many continue to live in harsh conditions on the streets and in the cities hostels/shelters. The show recognises the great work done by various local voluntary organisations that exist to help meet the most basic needs of those affected by homelessness in the city. Such support is much needed in the context of a recent Government report which highlighted a lack of adequate local authority support for the homeless nationwide.

10 artists/contributors from a number of disciplines (photography, research, illustration, installation, sculpture, poetry and performance) will display art works addressing different dimensions of homelessness, yet together highlight homelessness as a political issue.

This is a Free Admissions event, with all donations going to the RealLove street team, Care for the Paw and The Homeless Period, local voluntary organisations who provide support and provisions to people who are homeless in Liverpool. The gallery will also be used as a base for street team work during this period, providing an opportunity for people who are homeless to view the work, get a hot meal and provisions to help them during the harsh winter months.

If you would like to donate, it would be very much appreciated. The smallest of donations really do make a difference. Please visit www.gofundme.com/homelessness-event

Bekki Perriman is a London based artist. She has been working on The Doorways Project for the last few years. Inspired by her own experiences of homelessness, the site specific sound installation offers the chance to listen to homeless people tell their story about everyday life on the streets. The project is accompanied by photographs of doorways where the artist once slept and personal memories of things that happened in those spaces.

Mark McGowan is a London based artist. He will present a video performance as The Artist Taxi Driver, providing political commentary on the issue of homelessness in the context of the Conservative Government’s austerity programme.

Tony Mallon is a photographic artist based in Liverpool. He has twenty years’ experience of working on award winning, temporary/permanent public realm art commissions. Tony will present an Arts Council England and The National Lottery funded project ‘Homeless’. The piece moves beyond the human presence to explore, examine and document through photography and text, the spaces and experience of living in homeless hostels in Merseyside during 2014-15. The piece was originally exhibited as part of LOOK/15, Liverpool’s international photography festival in 2015.

Amanda Marie Atkinson in a Senior Researcher at Liverpool John Moores University and Liverpool based artist. She will present a number of pieces commenting on women as a particular vulnerable group for homelessness, underpinned by UK research and her experiences of volunteering as part of the RealLove street team. She will also present a collaboration with artist Alan Williams, which re-contextualizes Carl Andre’s 1967 piece ‘Equivalent VIII’ (AKA ‘Bricks’), to comment on the potential (and responsibility?) of contemporary art to make social and political commentary.

Alan Williams is a Liverpool based artist. He will exhibit illustrations of the dogs of people who are homeless in Liverpool underpinned by conversations with owners as part of his voluntary work with the RealLove street team. He will also present a collaboration with artist and Senior Researcher, Amanda Marie Atkinson, which re-contextualizes Carl Andre’s 1967 piece ‘Equivalent VIII’ (AKA ‘Bricks’), to comment on the potential (and responsibility?) of contemporary art to make social and political commentary.

Kim Ross-Houle is a researcher at the Public Health Institute, Liverpool John Moores University. Her piece presents photographs taken by homeless people in relation to their experiences and what they feel is significant to them. These photographs were taken as part of a wider research project that considered the relationships between alcohol consumption, significant life events and housing/homelessness. The wider research team includes Dr Lorna Porcellato, Dr Hannah Timpson, Ellie McCoy, Andrew Bradbury and Collette Venturas. The research has been funded by Alcohol Research UK.

Helios Bernal Alcantarilla is a Spanish artist based in Liverpool. He will present print and sculpture from “Los durmientes” (The Sleepers), an art project exploring rough sleeping during his residence in Milan and Madrid.

Marianne Skovdahl is a Norwegian documentary filmmaker based in London. She will present footage exposing hostile architectural designs; providing critical commentary on its growing usage in London’s urban spaces, which leads to the further exclusion and marginalisation of people who are homeless.

Kaylen Forsyth is a Cumbrian based writer. She will display poetry on homelessness in the context of austerity and the vilification of homeless people carried out by the media. This work is underpinned by her experiences of visiting Liverpool and witnessing urban rough sleeping for the first time.

Tomo is a Liverpool based artist. As a child of the grim winter of Liverpool, fussed Tomo with paint pens, where others still painted with watercolors. Over the years, his work always bumbled between fine art and graffiti, without ever really get recognition from one of these two bearings. At first the artists were few alternatives to working with discarded materials, but instead of considering it as a limitation of it was a kind of alchemy and a new approach of recycling and transformation. The drive for his work he draws from an irrepressible curiosity and adventurousness. Whether he headlong jump into the sea of mundane banality or carefully considered its surface, Tomo emerged again and again the rusty, bent spoon into the brew stirs vigorously and lets you try it.