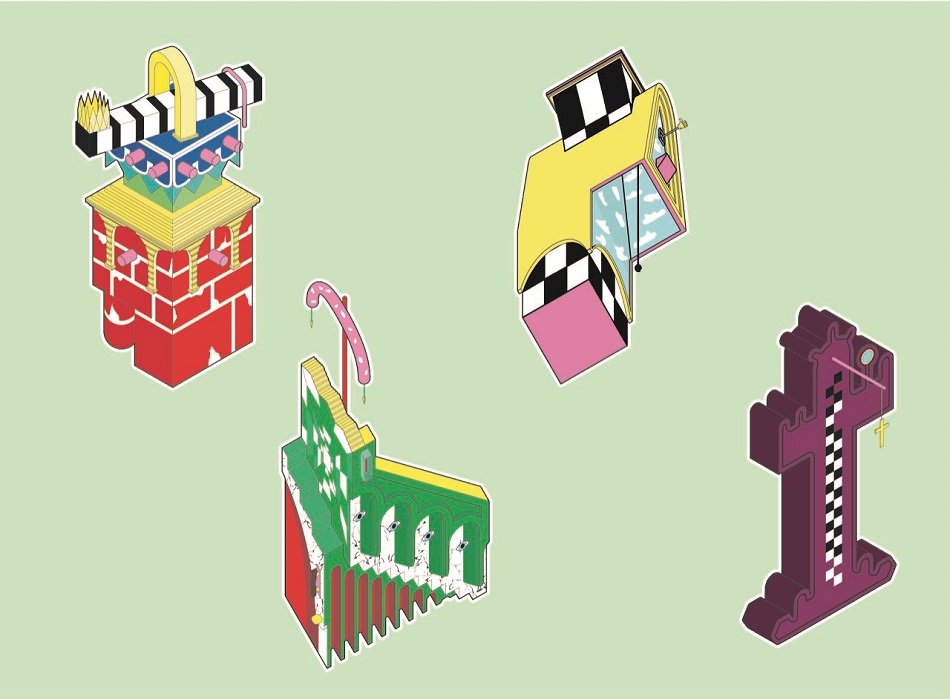 RIBA Chartered Practice Studio MUTT bring the elaborate writings of Sir John Soane to life with In Character, an exhibition where ornament, colour and form explore the ways in which architecture can communicate to us.

“Four characters huddle in discussion, ambling around this peculiar silver shrine. All we hear are the nonsensical murmurings of our assembled cast. They stand with dignity, dressed in their distinctive finery which scrapes through the undergrowth.

It’s hard to say who they are. We can only make our own assumptions on the group: an enigmatic spirit dressed with pagan ornament, a theatrical individual balancing a ruler on his head, a daydreaming, exotic looking introvert and in the background a religious-looking man, silent and in distress.”

A person’s character is what makes them individual – it is who they are. Through In Character, Studio MUTT give life to four characters as architectural compositions of ornament, colour and form. The pieces exist somewhere between a very big model or a very small building in scale and aim to move beyond mere representation or speculation. Instead, the project is an investigation into character and architecture, exploring ornament as a tool through which architecture can communicate, whether this be factual or fictional narratives.

Initially the characters were a result of an investigation into the Sir John Soane Museum, where they were first shown as Out of Character in 2018. In re-exhibiting these site-specific pieces, Studio MUTT asks how can a changing context affect a reading of architecture? What implications can this have across a building’s life cycle, and inversely, how can we change an existing construction’s context to offer new meanings, re-readings and new insights into existing conditions?

Too many pieces of architecture are devoid of character; plain, voiceless and clone-like. If buildings and architecture are to be more relatable, how can we imbue them with character? And, how can the character of a person, culture or place inflect on that of a building? What could an architectural character be, and what are the tools to convey that?

An exclusive launch evening will be held for those who want to get a first glimpse of these enigmatic works on 21 March. Featuring conversations between James Crawford from Studio MUTT and Owen Hopkins from the Soane Museum, this event is your chance to get an insight into the cryptic characters that form the subject of the exhibition and those who helped realise these bold creations. Register here.

Studio MUTT is an award-winning architecture practice established in 2017 by Graham Burn, James Crawford and Alexander Turner, based in Liverpool and London. The studio operates internationally in arts, culture and retail sectors with an underlying mission to create characterful projects which are unique, specific and joyful. Recently completed projects include a London flagship store for contemporary menswear brand, Universal Works, Out of Character, an installation at the Sir John Soane Museum, and Inn Bloom, a floral British inn in Mexico City for AMD2018 festival and the British Council. Graham, James and Alexander have lectured widely, and have taught at University of Liverpool, Oxford Brookes, The Bartlett and University of Nottingham.