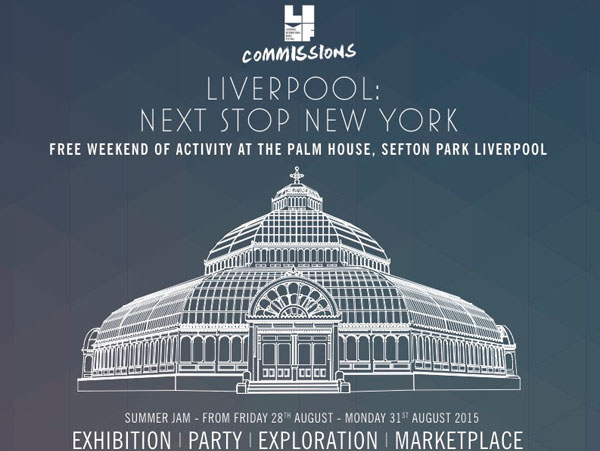 Liverpool: Next Stop New York
FREE party and weekend of exploration at The Palm House

Tracing these roots from the post-war period through to the nineties, Liverpool: Next Stop New York will celebrate the music that formed unique bond between the two trans-Atlantic cities, in a free, four-part LIMF commissioned extravaganza.

Launch Party – Friday 28th August
Taking to the iconic Palm House in Sefton Park, the party on 28 August at 19.30 promises to be the highlight of the four events. With DJs including Greg Wilson, the first-come-first-served free party is sure to fill up quickly

Working at Manchester’s Legend, Wirral born Wilson took the cutting edge sounds coming over from New York and introduced them to a Manchester crowd in the late seventies and early eighties, both establishing the electro-funk/boogie scene in the city and playing an essential role in the UK’s adoption of mixing DJs – the tradition of announcing records still ingrained in the culture at the time. On the back of his success at Legend he was hired as the first ‘dance music specialist’ at the later legendary Haçienda in 1983.

Returning to Liverpool is Les Spaine. Born in Sierra Leone and then brought to Liverpool, Spaine made his mark on UK club culture in the seventies during his time at The Timepiece. Contrary to the belief that all Northern DJs played Northern Soul, DJs like Les spearheaded Liverpool’s defiant move against the grain, playing funk and soul records from the likes of Marvin Gaye and Kool & The Gang. Held in high regard by those in the know, Les went on to work for both Motown and Capitol Records after his time at Liverpool’s infamous funk and soul club.

A key figure in Manchester’s funk and soul underbelly in the nineties, Mark Rae’s Grand Central Records harnessed the soul-driven hip-hop sound coming out of the city at the time and combining it with the best he could find further afield. Bridging the gap between jazz, funk, reggae, hip-hop, breakbeat and jungle, his DJ sets draw from a whole history of Black American and British music.

Deep-rooted in the city’s hip-hop culture, having pushed it forward since the late nineties, No Fakin’ are a Liverpool hip-hop collective born out of a night of the same name. Made up of Kwinzola and DJ Illson, they use four turntables to create a semi-live show, blending and layering their way through a kaleidoscopic array of music anchored in hip-hop, complemented by live instruments, samplers, drum-machines and more.

Split over Saturday 29 and Sunday 30 August from midday until 18.00, an engaging exploration features a range of Q&A sessions, discussions and panels with music between and during. Covering a range of topics relating to Liverpool’s connection with US black music and culture, the interactive talks draw together a range of knowledgeable people drawing from first hand experience.

Cunard Yanks Ritchie Barton and Billy Harrison will lead the talks exploring the influence the trans-Atlantic cruise-liner they worked on had on the city, while the Liverpool: From The Chants to The Real Thing will feature Eddie Amoo, famed for his work with both bands in the 1960s and 70s and Ozzie Yue, who went on from his Merseybeat-fame with The Hideaways to become a familiar face on British television.

Talks on the Influence of Radio will be hosted by presenter BBC Radio Merseyside’s Sunday evening Upfront Show Ngunan Adamu, the local DJ with an encyclopedic knowledge of the city, Bernie Connor and presenter of the Friday night StreetBeats Show on Wirral Radio, DJ 2Kind.

Renowned local selectors Stephen ‘The Principal’ Nze and Ivan ‘The Russian’ Freeman will be exploring the history of Social Clubs and Soundsystems in L8 in talks that will seque into a discussion around the Earthbeat movement of the late eighties and early nineties with the visual artist Jonathan Swaine.

1.30PM – MAKING WAVES: THE IMPORTANCE OF RADIO DISCUSSING THE ROLE OF RADIO IN LIVERPOOL – THE SOUNDS AND IDEAS THAT WERE DISSEMINATED, AND THE WAY IT AFFECTED MUSIC PRODUCED AND PLAYED IN THE CITY

3PM – ERICS TO EARTHBEAT – EXPLORING THE PERIOD FROM THE LATE 1970s TO LATE 1980s, AND THE EMERGENCE OF NEW BLACK MUSIC IN LIVERPOOL AT THIS TIME

13.30PM – THE CHANTS TO THE REAL THING – SPECIAL GUEST EDDIE AMOO CHARTING THE PROGRESSION AND APPROPRIATION OF BLACK MUSIC IN LIVERPOOL, FROM THE LATE 1950s TO THE LATE 1970s

4.15PM – THE SOUND OF MUSIC – THE SOCIAL CLUB TO THE SOUND SYSTEM – EXPLORING THE IMPORTANCE AND ROLE OF THE THRIVING LIVERPOOL 8 SOCIAL CLUB SCENE, THE TRANSITION TO BLOCK PARTIES AND SOUND SYSTEM CULTURE, AND OTHER HAPPENINGS AT THAT TIME
Feat. STEPHEN NZE – THE PRINCIPAL / CHARLIE C / IVAN THE RUSSIAN / JONATHAN SWAIN / DJ 2KIND / MUHAMMAD KHALIL AKA EUGENE SAMUEL LANGE / HOSTED BY BERNIE CONNOR

To round things off on Monday 31 August, from midday until 18.00, Liverpool: Next Stop New York will return to Sefton Park’s Palm House in the form of a marketplace. Boasting an array of vinyl from some of the region’s premier retailers and record labels, alongside screen-prints, posters and other must-have collectibles.

Exhibition at the View Two Gallery

From 7 – 31 August, an exhibition at the View Two Gallery on Mathew Street will set the context for the series of events. Investigating the links between Liverpool and New York and how they was enhanced by a love and appreciation of Black American music and culture, the RedHouse Originals curated gallery and exhibition will feature an array of works from artists and photographers with links to both cities.

As well as an exclusively commissioned sculpture by Mike Badger of The La’s and original paintings by Horace Panter of The Specials the exhibition will also feature work by acclaimed artists, Dudley Edwards, Pete McKee, Low Coney and The Studio of Ezra.

Alongside the exhibition a range of archive photography, including that of Liverpool based photographer Mark McNulty, will be displayed to shine more light on the fascinating post-war period. With contributions from original Cunard Yanks themselves and selections from the archives of the Liverpool Echo, National Museums Liverpool and the International Slavery Museum, there’s plenty to draw from when building a picture of the era.

Following the development of Liverpool’s culture later down the line, the exhibition will also feature shots of L8 from Tricia’s Porter’s recent exhibition at Bluecoat, unseen photographs of Earthbeat taken by Roger Sinek and from Steve Howe’s personal collection.

This is bolstered by a series of eight exclusively commissioned portraits by Liverpool-based photographer Robin Clewley, featuring some of key contributors to the Next Stop New York project.