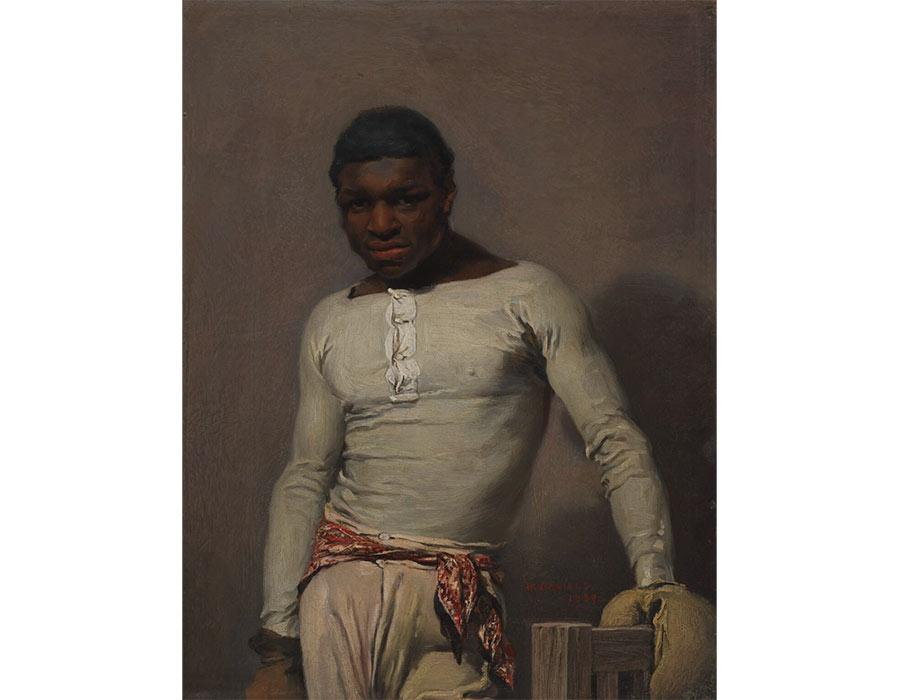 Portrait of a Liverpool boxing legend on display

This portrait of 19th century boxer Jem Wharton by Liverpool artist William Daniels is on display in the Museum of Liverpool’s The People’s Republic gallery as part of the National Portrait Gallery’s COMING HOME project.

James ‘Jem’ Wharton was one of the most successful boxers in Britain in the first half of the 19th century. He was popularly known as the ‘Young Molineaux’ after the famous American boxer of the preceding generation, Tom Molineaux. Wharton’s early life remains uncertain; he described himself as a Moroccan who arrived in England in 1820 but his place of birth was recorded as London in the 1851 census. Winning his first bout in 1833, he retired undefeated in 1840. In later life, he worked as a trainer and promoter and ran a tavern in Liverpool.

This portrait by the Liverpool artist William Daniels presents Wharton at the height of his career. He is shown as if pausing during a training session with the ‘colours’ from his latest victory tied around his waist. It is an early depiction of a boxer wearing gloves. At this date, their use was generally reserved for training and they only became mandatory in professional fights with the adoption of the Queensbury Rules later in the century.

Following his outstanding boxing career, Jem made Liverpool his home. In 1849 Jem and his wife Mary opened The Vine Tap tavern at 9 Great Charlotte Street. Their daughter, Cecilia, was born around 1848.

During Jem’s time in the early 19th century, bare knuckle prize fights and fairground booths were established in the South End (Liverpool 8 / Toxteth). This small part of South Liverpool has continued to provide a procession of champions, medal holders and serious contenders. Collectively achieving an astonishing haul of 30 World titles and 17 British, Commonwealth and European championships.

From 1911 the British Boxing Board of Control introduced the colour bar that stipulated only those ‘born of white parents’ were able to fight for the domestic belt. While this ban was eased in 1947, Black boxers still endured racist abuse at ringside boxing venues.

Despite these challenges, Liverpool’s Black boxers have made an exceptional contribution to the city’s sporting heritage.

This includes Jem, who died in Liverpool on 25 April 1856 and was buried in St John’s Cemetery (now St John’s Gardens).