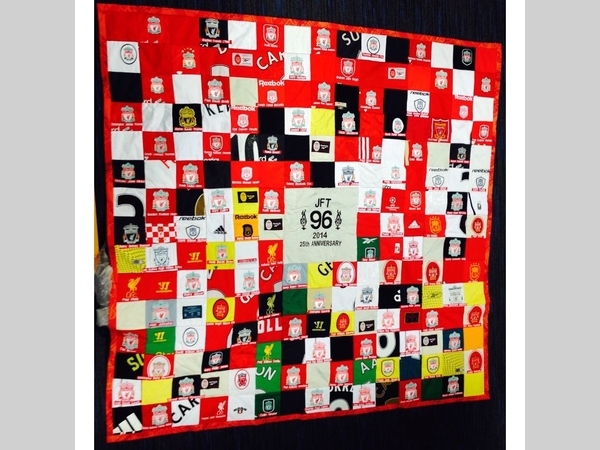 Two new items from the Museum of Liverpool’s collection are on public display in the Wondrous Place gallery from 5 April 2016 to mark the anniversary of the 1989 Hillsborough tragedy, on 15 April.

The items – a painting titled ‘You’ll Never Walk Alone’ and a patchwork quilt – have a common source of inspiration; the resilience of the families of the 96 people who lost their lives during the FA Cup semi-final between Liverpool and Nottingham Forest.

The painting is a remarkable portrait of actress Sue Johnston by international award-winning artist, Christian Hook. Moved by Sue’s campaign work with the Hillsborough Family Support Group (HFSG), Christian first created a conventional black and white portrait of Sue. He then completed the painting using his feet while listening to the Liverpool anthem ‘You’ll Never Walk Alone’. The song’s emotive chorus takes on a new meaning in the context of the Hillsborough tragedy, something powerfully expressed through Christian’s work.

The patchwork quilt was made from donated football shirts and skilfully crafted by Merseyside woman Linda Whitfield. 96 Liver Birds make up the quilt and represent the lives lost, with the children poignantly remembered by a smaller Liver Bird from a child’s shirt. The quilt also includes each of the victims’ names, with those who went to the match together kept close together on the quilt.

“In the summer of 2014 I watched the news on the families’ fight for justice on TV and it gave me inspiration for my next project. With the help from a large number of Liverpool fans my vision came to life.
I was fortunate enough not to lose anyone in the disaster but being part of a big LFC family it has an important place in my heart.” Linda Whitfield