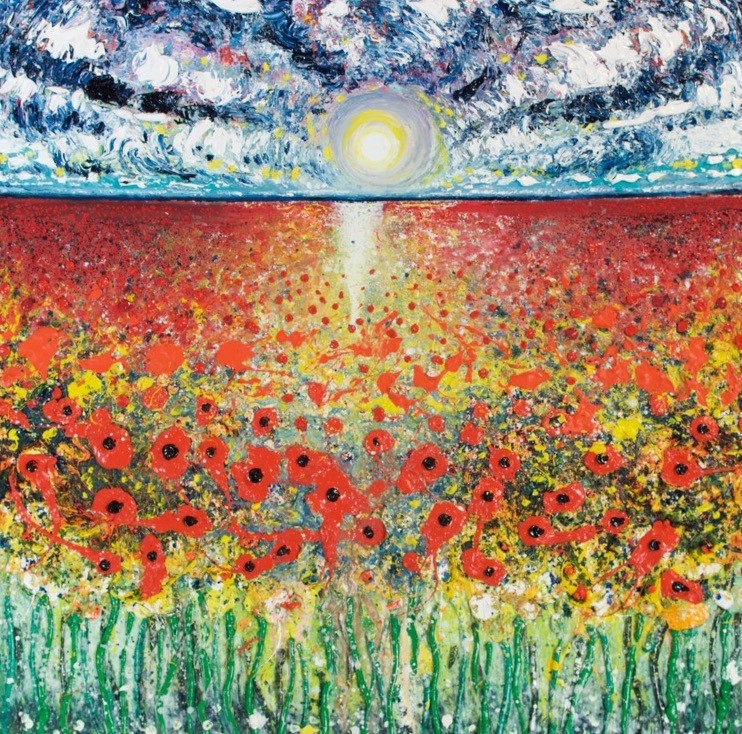 Following the sell out show of their ground breaking augmented reality exhibition The Danger Tree in Greenwich earlier this year, Scarlett Raven and Marc Marot’s exhibition will be moving to Liverpool to coincide with the 100 year anniversary of the end of The Battle of the Somme.

The Danger Tree is inspired by the works of several legendary WW1 poets including Wilfred Owen, Siegfried Sassoon and Rupert Brooke, and is a tribute to the Newfoundland Regiment who, under orders from British Command, used a tree halfway into No Man’s Land to assemble. Regrettably the tree was highly visible to two German machine gun nests, resulting in almost the entire regiment being wiped out within 20 minutes of the commencement of hostilities. Scarlett and Marc aim to draw attention to the humanity behind the horror, their interpretation of this devastating and touching part of human history.

Moving up to the Dr Martin Luther King Jr building in the historic Liverpool Docks, the exhibition will commence with a private view on Friday 18th November 2016, the day the Battle of the Somme ended 100 years ago, and then open to the public from Saturday 19th November 2016. The Liverpool PALS were the first battalions raised during the Great War and the last to be stood down.

One of the 15 paintings in The Danger Tree exhibition is dedicated to the memory of the Liverpool PALS. Entitled “The First and the Last”, an enlarged print of the painting will be displayed in Exchange Flag Square in recognition of the role they played. The AR for this piece comes from a touching letter written by 28 year old Arthur Seanor who was killed on the opening day of the Battle of the Somme. He wrote this letter to his mother to be delivered in the event of his death.

Produced in oil on (4’ x 4’) canvas, each painting was conceived, executed and digitally captured layer by layer; a typical painting is made up of 10,000 photographs of the canvas capturing every daub of paint as it is laid down. Working in collaboration, Scarlett has painted the images and Marc has created the integrated animations and digital art, including archive photographs and audio recordings of soldiers from the First World War, as well as text, animated graphics, archive film footage, music and sound effects. All of these elements were painstakingly created layer upon layer, each “buried” within the metadata only to be “exposed” via Blippar’s AR technology, and thereby unlocking the emotional story “hidden” beneath the visible paint on canvas. Leading British actors, Stephen Graham, Christopher Eccleston, Sean Bean and Sophie Okonedo provide moving renditions of the poetry, narrating the soundtrack to the images. Film composer Marc Canham creates the beautiful bespoke score for each painting.

The exhibition itself has been created as an installation within the ground floor of the Martin Luther King Jnr Building. Created by award-winning film set designer Kave Quinn, the exhibition space has been recreated into a replica of a bombed out gallery on the French / Belgium borders of 1916. “We don’t hold an exhibition,” say Scarlett and Marc, “We host a visual experience.” Visitors can download the free app Blippar for iOS and Android ahead of the opening or they will be provided with iPads and headphones to engage with the paintings.

A collection of limited edition fine art will accompany the collection. Available to view at the museum, the work will be launched as an online exclusive at www.castlegalleries.com on Friday 18th November 2016. Scarlett’s work is exclusively published by Washington Green Fine Art, the UK’s leading art publisher, and is available to buy from Castle Fine Art galleries nationwide. For over 30 years, Washington Green has specialised in bringing new talent to the contemporary art market; at just 27, Scarlett was talent spotted by the art publisher who held her first solo show “The Eleventh Hour”, in collaboration with The Royal British Legion, in 2014 in London’s Mayfair to critical acclaim.  She has since gone on to release a number of signed Limited Edition artwork with the company, which prides itself in nurturing the very best the UK art scene has to offer.