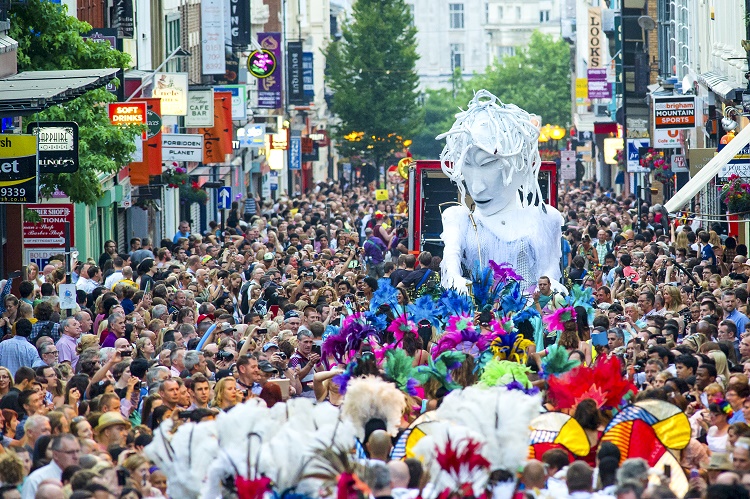 As the world’s eyes turn to Rio for the 2016 Olympics, temperatures are rising in the city centre as Liverpool prepares to host its own Rio-style carnival this weekend.

Just in time for the heatwave, Liverpool’s International Samba Festival will transform the Commercial District into a sizzling hotbed of colourful carnival action this Saturday, 16th July and Brazilica 2016 promises to be even bigger and better than ever before!

The party will begin this Friday, 15th July, as the newly refurbished PanAm on Liverpool’s Albert Dock will host a dazzling evening of dance, costumes and Brazilian vibes for Brazilica’s annual Carnival Queen Competition where Brazilian dancers from far and wide battle it out for samba supremacy.

The fun will continue on Saturday, 16th July as Brazilica takes over the historical Derby Square with a sizzling programme of live music all day long. From midday until 10pm, the Main Stage at Derby Square will come alive with bands playing samba, Brazilian funk, gafieira, forro, bossa nova, with Brazilian DJs and samba dance shows thoughout the day.

You can sample Brazilian food, such as Feijoada stew with salsa and delicious Brazilian desserts, soft drinks, caipirinhas and Brazilian beer from the stalls around the square from midday to 10pm.

Plus, you can view the Biennial installation opposite Liverpool Law Courts, where Lawrence Abu Hamdan’s Hummingbird Clock, a tree of binoculars resembling CCTV cameras, keeps watch over the Town Hall’s clock.

And there will also be samba performances in Church Street and Clayton Square on Saturday, 16th and 17thJuly from 1-4pm.

But the highlight of the day will undoubtedly be the spectacular night-time Carnival Parade which will began at 8pm on Saturday 16th July and will feature world class dancers and Samba bands from across the UK and overseas and even as far as Singapore!

Headed by the newly crowned Carnival Queen, the Carnival Parade will make its way from Abercromby Square, snaking through the city centre streets ending up at Church Street.

Thousands of people line the route to watch the huge samba carnival parade travel through the city centre, filling the streets with colour, music and fun.

Starting from Abercromby Square, the parade will turn onto Oxford Street and turn left on to Hope Street, the parade then turns right by the Philharmonic pub and will follow Hardman Street and continue on to Bold Street. The Parade will then continue onto Church Street, finishing at the Whitechapel Junction.

So make sure you come early to secure your position and get the best view of the spectacle which kicks off at 8pm.

The festival fun will continue with an After Party at The Arts Club on Seel Street, home of Circus and Chibuku, hosted by carnival DJs with live performances from visiting samba bands from 10pm until 4am. Entry £5.

Maeve Morris, Festival director of Liverpool Carnival Company, said: “2016 is going to be a brilliant year for Brazilica as we’ve got a fantastic line-up with more samba bands than ever before! So come down to Derby Square on Saturday, 16thJuly and soak up the carnival atmosphere – it will be a great day out for all the family!”

Bill Addy, Chief Executive of Liverpool BID Company, headline sponsors of Brazilica,  said: “We’re really looking forward to hosting Brazilica for the first time in the Commercial District – it’s one of the highlights of the Liverpool summer. With the Rio Olympics on the horizon, it’s going to give the city centre a real taste of what to expect in terms of the amazing sights, sounds and smells of Brazil.”

The UK’s largest Samba Carnival event, Brazilica has become one of the flagship events of the year in Liverpool’s festival calendar. A colourful celebration of Brazilian music, dance, culture, food and sport, it attracts over 60,000 visitors to the city centre.

As well as the packed programme of events for the main Carnival Day, Brazilica has been hosting fringe events packed with exhibitions and workshops including a Brazilian Film Festival which runs until Saturday, 6th August at various locations through the city showing nine films celebrating Brazilian life and culture, from biographies and documentaries to comedy and drama. Most are free to attend.

If you’re planning to come to the Brazilica Festival then check out Merseyrail’s new website www.DestinationMerseyside.com which showcases destinations and events around the Merseyrail network. It also makes planning travel to the destinations really easy with a Day Planner containing the nearest station info, train times and walking routes from the station.

Merseyrail has kindly set up Brazilica page at  http://www.merseyrail.org/destination-merseyside/events/brazilica-festival.aspx giving you all the travel information you need.