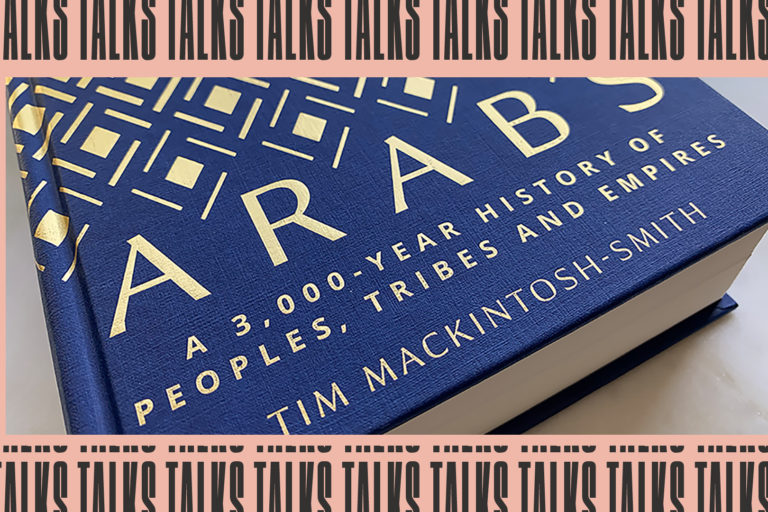 Arabs: A 3,000 Year History of Peoples, Tribes and Empires

‘He seems incapable of writing a dull sentence, and in him the scholar, the linguist and the storyteller swap hats with marvellous speed’. New York Times

Having been based in the Arab world for over a third of a century – principally in the Yemeni capital Sana’a – Mackintosh-Smith is one of the most significant writers dedicated to a modern study of Arabic culture and people.

A fan of Arabic travel literature, he is the author of several books of his own travels. His trilogy on Ibn Battutah (Travels with a Tangerine, The Hall of a Thousand Columns, and Landfalls) retraces the Moroccanʼs wanderings around three continents. He has co-written and presented a BBC series on Ibn Battutah, described by the Guardian as ‘marvellous, memorable television’.

Arabs: A 3,000 Year History of Peoples, Tribes and Empires is his most recent book. Published by Yale University Press it is, according to the Spectator, ‘a book of vast scope and stunning insight; ‘it ‘rebalances’ Arab history, seeing Islam as part of it, not the start of it’.

Time differences  mean this will be a pre-recorded event, however we will be encouraging questions to be sent in to us at LAAF ahead of the event. Please email admin@arabicartsfestival.co.uk with any questions you have for Tim and Denyse by Monday 15 June 2020.

Tim Mackintosh-Smith is a fan of Arabic travel literature, and the author of several books of his own travels. Of these, his trilogy on Ibn Battutah (Travels with a Tangerine, The Hall of a Thousand Columns, and Landfalls) retraces the Moroccanʼs wanderings around three continents. Timʼs work has earned him the 1998 Thomas Cook/Daily Telegraph Travel Book Award and, appropriately, the Ibn Battutah Prize of Honour, awarded in 2010 by the Arab Centre for Geographical Literature. Tim has delivered the Hamilton A.R. Gibb Lectures at Harvard, and his writing has been anthologized in a number of collections, from The Picador Book of Journeys to The Howard Marks Book of Dope Stories. His most recent work, published by Yale University Press, is Arabs: A 3,000-Year History of Peoples, Tribes and Empires – ʻa book,ʼ according to the Spectator, ʻof vast scope and stunning insightʼ; it ‘rebalances’ Arab history, seeing Islam as part of it, not the start of it. He is currently at work on a new edition and translation of Abd al-Latif al-Baghdadis Kitab al-Ifadah, an eye-witness account of late twelfth-century Egypt and its devastating famines.  Tim is a Fellow of the Royal Asiatic Society of Great Britain, and an emeritus Senior Fellow of the New York University Library of Arabic Literature. He has been based for more than a third of a century, through thick and thin, in the Yemeni capital Sanaʼa, but since late 2019 has been ʻon sabbaticalʼ in Kuala Lumpur.

Denyse Woods is an Irish novelist, based in Cork. Three of her novels are set in the Arab world, including the critically-acclaimed Overnight to Innsbruck (Lilliput Press) and Like Nowhere Else (Penguin Ireland). Her sixth novel, Of Sea and Sand (Hoopoe Fiction, American University in Cairo Press) is set in Oman and Iraq. Denyse is the recipient of an Arts Council of Ireland Literature Bursary and she has been awarded residencies in Shanghai, Liznjan, Paris and Ernest Hemingway’s studio in Key West. She is the former director of the West Cork Literary Festival.