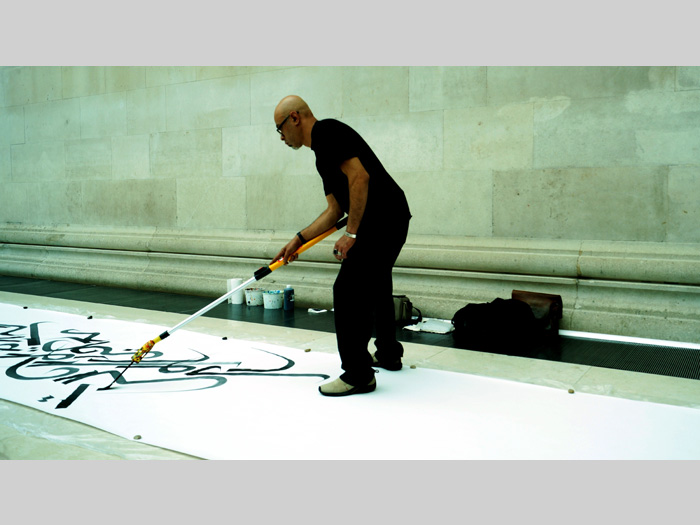 The UK premier of the work of one of Cairo’s foremost artists, a highly acclaimed Egyptian muralist, a boundary-breaking electronic, hip hop, Dabke band and a group whose singer fled from the Iraqi war are just some of the exciting acts to have been announced for this year’s Liverpool Arab Arts Festival (LAAF).

Each summer, the UK’s biggest annual Arab Arts Festival attracts audiences from across the world, who flock to see the richness of Arab culture through a packed programme of visual art, music, dance, film, theatre, literature and special family-friendly events.

This year’s festival, which runs from 16-24 July, will explore the theme Undocumented, and organisers have now announced the first wave of nationally and internationally celebrated artists and performers coming together for LAAF this summer.

Below are just some of the events see the full listings and more at www.arabartsfestival.com

16 July 2016 1 – 4pm
LAAF at the World Museum
World Museum | FREE
Part of Liverpool Arab Arts Festival 2016
Discover and celebrate the diverse stories, dance and traditions of the Arab diaspora at Liverpool’s World Museum, and witness the production of a specially commissioned large-scale artwork by Egyptian calligraphy artist Nazir Tanbouli. Suitable for all ages.
Nazir Tanbouli
Painter, muralist and illustrator Nazir Tanbouli will explore the idea of mythology and narrative with a dramatic explosion of ink, black and white marks on massive sheets of paper.

17 July 2016 12 – 5pm
LAAF Big Sunday
Bluecoat | FREE, donations welcome
Part of Liverpool Arab Arts Festival 2016
One of LAAF’s highlight family events, attended by thousands of people of all ages and culture, the Big Sunday brings an Arab extravaganza to Bluecoat – Liverpool’s centre for the contemporary arts.
Soak up the festival atmosphere and enjoy music, contemporary and folkloric dance, children’s cultural crafts, visual art, literature and debate.
Highlights include performances by Dublin based Palestinian musician Ruba Shamshoum, who brings her own unique blend of jazz and pop wrapped in a Middle Eastern vibe, and Liverpool born Yemeni singerReham Al-Hakimi, who at just 14 year old has become a firm festival favourite.
Festival-goers can also witness Egyptian painter, muralist and illustrator Nazir Tanbouli produce a large-scale calligraphic artwork. Nazir’s work is created through a live physical act of the body, which he describes as ‘meditational drawing’.
Hear author Samantha Herron introduce her new set of stories based in contemporary Morocco and inspired by her long immersion in the culture, language, traditions and storytelling of the country. Or take part in a folkloric dance workshop with Moroccan artist Nawarra.

18 July 2016 7pm
Egypt comes to LAAF – Dance Double Bill
Bluecoat | £3
Part of Liverpool Arab Arts Festival 2016
A double bill of contemporary dance choreographed and performed by two young independent dance companies, each playing significant roles in the development of contemporary dance for the future of Egypt. Both performances explore aspects of contemporary Egyptian culture in very different ways, and have each been supported by the British Council.
Belbaladi (Premier) – Ezzat Ezzat Dance Company
The UK premier of contemporary dance piece Belbaladi – an exploration of the most common gestures used in Egyptian body language, set to a score of Mahraganat: a music that comes from the heart of the Egyptian society.
Belbaladi represents independent dance studio Ezzat Ezzat’s journey to find a style of movement that emerges from the Egyptian people – one that is influenced by this complex ancient society, mixed with a contemporary sense of humour.
Ancient Modernity – Joon Dance
Choreographer and dance artist Zosia Jo brings together her multidisciplinary interests of spoken word, theatre and dance to create a living, breathing, dancing museum of modern Egyptian culture. There will be no pharaohs, no hieroglyphs and no talk of revolution. Performed by Egyptian dance artist Aly Khamees.

19 July 2016 6.30pm
Women and gender: A selection of films from BBC Arabic Festival 2015
FACT
Part of Liverpool Arab Arts Festival 2016
Series of short films followed by discussion with Sheyma Buali, Director, BBC Arabic Festival and Christine Garabedian, director of Pregnant and in Chains
Suitable for people aged 16 and over
Liverpool Arab Arts Festival presents two evenings of documentaries from BBC Arabic Festival 2015, an annual event that presents topical short films and documentaries from across the Arab world. This year’s applicants were asked to submit work along the theme of ‘Rulers and Ruled: Power in a Changing Arab World’ and to expressly explore the struggles for power and control that continue to shake the region. Each evening presents films and discussion relating to sub-themes that emerged in the selected works – ‘Women and Gender’ and ‘Cities and Chaos: After the Revolt’.
Pregnant and in Chains
Christine Garabedian
Through exclusive interviews and undercover footage, BBC Arabic exposes the hidden fate of women who have broken the United Arab Emirates’ strict laws on sex outside marriage.
Land of Men
Khalifa Ali
An exploration of the opinions of both men and women on the subject of women’s rights after the revolution in Libya. The collapse of Gadhafi’s regime brought a new hope to women but many felt the reality fell short of their optimistic vision.
Ibn Bnoot
Mina Magdy
A fantastical comedy that imagines a world in which women are the dominant sex, controlling men’s lives and choices. This inverse world, while presenting a comical juxtaposition, highlights the issue of women’s rights and subjugations across patriarchal societies.
Sisa, Iron Lady
Aly ElSotohy
Sisa’s husband died while she was pregnant with their first child. This short report tells the extraordinary story of how she has spent the past 43 years dressing as a man in order to work and support her child.
The Great Safae
Randa Maroufi
A fictional, experimental documentary inspired by a real person. Referred to as ‘The Great Safae’, she was a transvestite who spent part of her life working as a domestic servant for the director’s family. Throughout this time, her ‘true’ sexual identity eluded everyone in the house.

Cities and Chaos: A selection of films from BBC Arabic Festival 2015
FACT
Part of Liverpool Arab Arts Festival 2016
Double bill of films followed by discussion with Sheyma Buali, Director, BBC Arabic Festival and Sherief AlKatsha, director of Cairo Drive
Suitable for people aged 16 and over
LAAF presents two evenings of documentaries from BBC Arabic Festival 2015, an annual event that presents topical short films and documentaries from across the Arab world. This year’s applicants were asked to submit work along the theme of ‘Rulers and Ruled: Power in a Changing Arab World’ and to expressly explore the struggles for power and control that continue to shake the region. Each evening presents films and discussion relating to sub-themes that emerged in the selected works – ‘Women and Gender’ and ‘Cities and Chaos: After the Revolt’.
A Day and A Button
Azza Hamwi
A regular day in today’s Damascus. Artist Azza Hamwi takes us on a visually poetic tour around the city as she tries to transcend the lines that have been drawn. Her attempts to walk freely in her home city are intercepted by gender segregation, sectarian divide and political inclinations.
Cairo Drive
Sherief AlKatsha
Cairo Drive explores life in one of the world’s most populated cities from its streets. Shot between 2009 and 2012 the film explores the country’s collective identity, inherent struggles and the sentiments that lead through the historic changes taking place in Egypt today.

22 July 2016 6 – 9pm
A Day in the Life of War
The Box at FACT | FREE, Donations welcome
Part of Liverpool Arab Arts Festival 2016
Documentary films directed and produced by young people in Yemen and Liverpool
Since March 2015, Yemen has been undergoing an internal and external conflict that has destroyed the country’s infrastructure and led to a humanitarian disaster. Thousands of Yemeni men, women and children have been killed or injured, and millions have been displaced and traumatised.
British Council commissioned a project enabling young people in Yemen to create short films capturing their experience of living in a conflict zone. In response, Yemeni Young People from Liverpool Arabic Centre have worked with Optical Jukebox to produce a documentary, commissioned by Saferworld, capturing how the conflict is affecting Yemeni here in Liverpool.
Join us for a screening of the films made by the young people in Yemen and Liverpool, pre-recorded interviews with young people and a live panel discussion.

23 July 2016 7.30pm
Arabs Are Not Funny!
Bluecoat | £6 / 5
Part of Liverpool Arab Arts Festival 2016
Ever heard the one about Arabs not being funny? Following the success of the first ever Arabs Are Not Funny! event outside London in April 2016, a new line-up of stand-up comedians representing the Arab world are back to showcase their talents.

23 July 2016 3.30pm
LAAF at the Mellowtone Bandstand
Sefton Park Bandstand | FREE
Part of Liverpool Arab Arts Festival 2016
LAAF brings musicians with roots in Arab culture to the bandstand in Sefton Park as part of a fantastic line-up of local and international folk, blues, roots and emerging acoustic talent, brought together by Mellowtone for the LIMF Summer Jam weekend.
Saturday 23 July 3.30pm
Anwar Ali & Dave Owen
Anwar Ali, a former refugee from the southern Somalian coast and Dave Owen, a talented musician from Oswaldtwistle, blend acoustic guitar and oud to create life affirmingly good music. The duo serendipitously met in Liverpool, but are influenced by everything from Norwegian folk to traditional Swahili wedding songs.