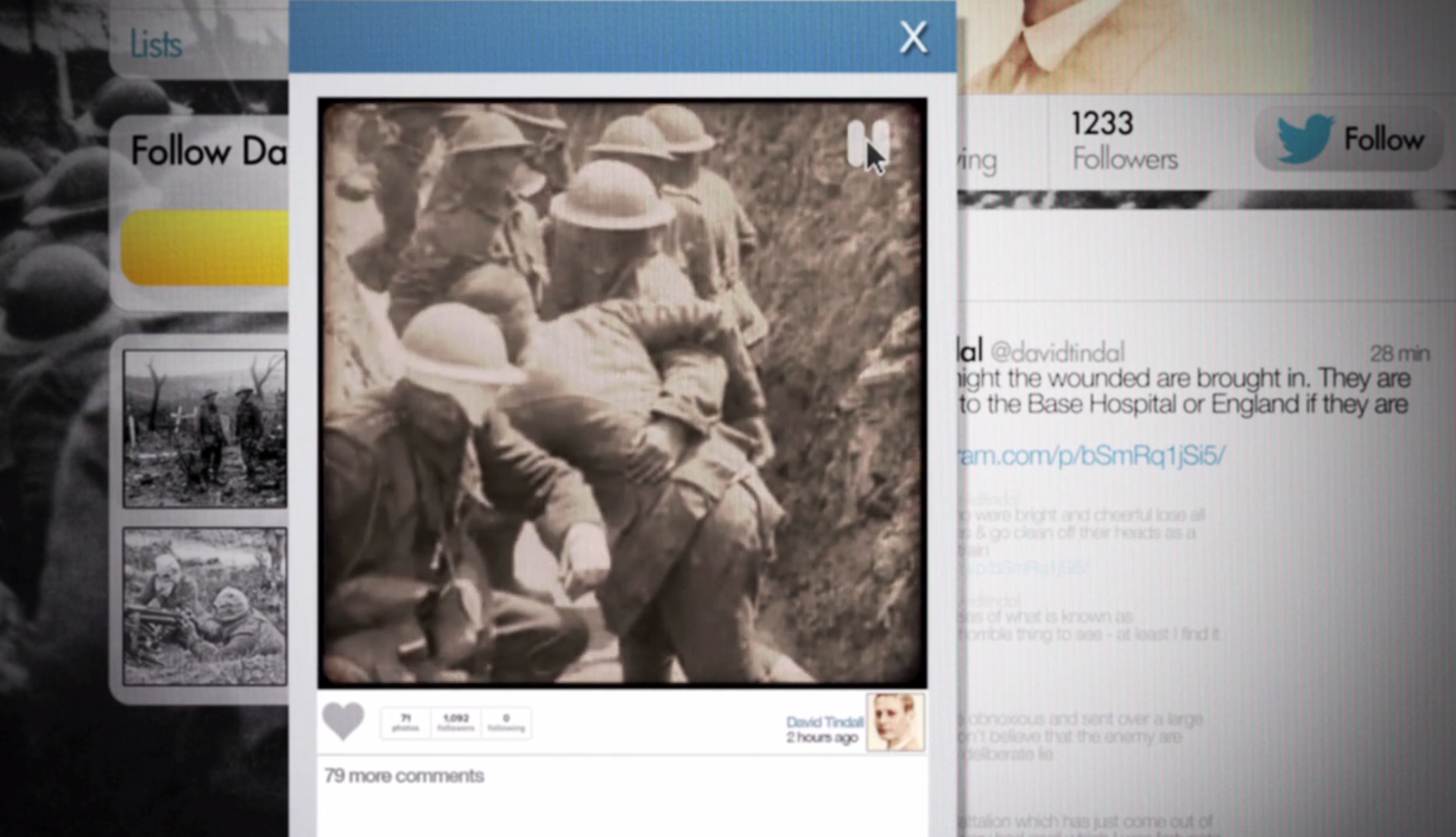 A century in 6 minutes

How would World War One have been described and remembered if the men and women who fought and endured it had possessed 21st century technology like smartphones and social media platforms?

A short film by television producer Mark Gorton provides the answer and makes the war to end all wars accessible to a generation of youngsters for whom it is ancient history.

The film is online and accompanied by a downloadable teaching resource of lesson plans and worksheets.

tWWItter will also be screened in FACT Liverpool’s ground floor 50 seat cinema called The Box all day on November 7. The first screening will be at 9am and every ten minutes thereafter until 5pm.

tWWItter tells the story of Private David Tindal. He was a Scot who fought in France with the Highland Light Infantry. While there he wrote eloquent letters back to his family in Scotland.

The film imagines what David Tindal’s messages home would have looked like if he had had a phone to hand instead of notepaper and postcards, and condenses a period of time that begins with his march to the front line in late 1915 and ends just before the Somme offensive of July 1916.

Mark Gorton says: “David Tindal was the great uncle of a friend of mine called Alasdair Coates. He lent me letters and cards David wrote – the letters normally from behind the lines, the cards while in the trenches. They are beautifully written and chart David’s journey from excitement to despair. Stripping them down to tweet length messages loses none of the originals’ power and brings his century old story vividly to life here in the modern world.

“tWWItter was made in 2014 as an experiment. I was just testing whether or not I could engage youngsters by setting David’s story in a world that would seem familiar to them. On paper, a harrowing and tragic story told in tweets felt like it shouldn’t work, but it did. The film won a couple of awards from the Imperial War Museum and was screened there and elsewhere. Luckily I’d been able to call upon talented friends and colleagues at Lion Eyes Television in Manchester.

“For Remembrance Week 2018 I decided it was worth updating the film. There are some visual changes, along with new music which also belongs in the here and now as opposed to the past. Great thanks to the talented Andrew Hunt who took a simple chord sequence of mine and turned it into a score.

“In collaboration with teachers we’ve also created educational resources to go with the film, and really hope they prove useful and engaging when schools turn their attention to the centenary of the end of World War One. There are primary and secondary versions.”

The tWWItter teaching resources can be viewed and downloaded here: www.thechildrenscontentcompany.com

Alasdair Coates, from Heswall in Wirral, says, “It’s remarkable but true that even after more than a hundred years this short film has awakened new respect for our family member. So many people sacrificed so much and asked for so little in return. It’s been really heartwarming to see David be recognised and, as a former teacher and Head, I hope tWWItter is screened in classrooms up and down the country. Lest we forget.”

Mark Gorton, who also lives in Heswall, adds: “If people are in the vicinity of FACT on Liverpool’s Wood Street on November 7, or fancy making a trip to see the film on a big screen, everyone involved would be delighted to welcome them. Give the film 6 minutes and it will give a century in return, and I hope audiences consider it time meaningfully spent.”