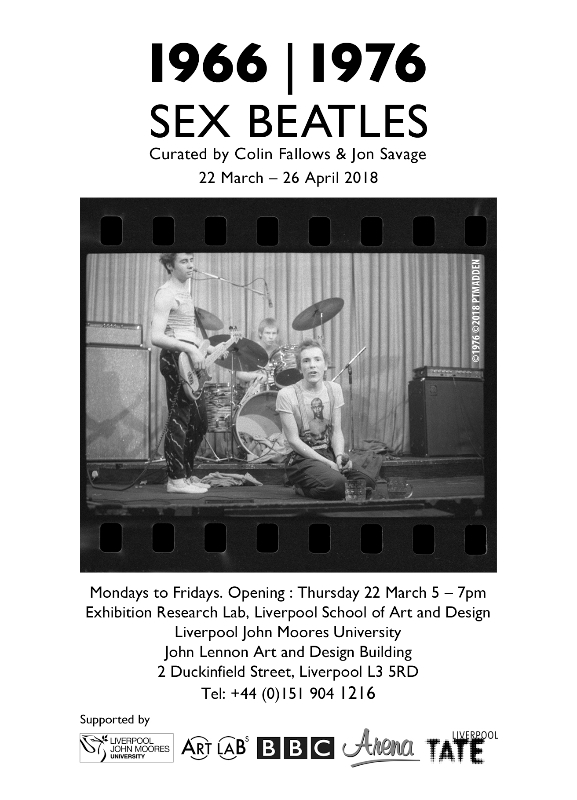 Two crucial years for two of Britain’s most iconic groups.

In 1966: The Beatles stop touring, offend America by John Lennon apparently saying that they are more popular than Jesus, and crack their image once and for all with the scandalous Butcher photograph.

In 1976: Sex Pistols start touring up and down the country, sign to EMI Records and swear live on evening TV in a national furore that defines Punk.

1976: was the year when Sex Pistols inspired a whole generation of new groups to be like them.

1966: a time still full of hope with a dark undertone.

This exhibition looks at these two iconic years through the lens of their most powerful pop groups. We know the differences – Swinging London versus Decaying London, LSD versus amphetamines, colour versus black and white, Love versus Anarchy – and the exhibition asks the question: What are the similarities?

Focussing on The Beatles ‘Butcher’ cover, a notorious and disturbing image that was used on the cover of the American album Yesterday and Today and then destroyed after causing a furore – and the photographs by PT Madden of a young and hopeful Sex Pistols in April 1976 – the exhibition, 1966 | 1976 SEX BEATLES builds a bridge between those two years.

The exhibition shows that the influences of 1976 were already there in 1966 – with The Beatles’ wish to create ‘situations’ through the Butcher cover coinciding with the spread of Situationist International ideas through France and into Europe. These in turn provided a direct influence on the ideas and images that fuelled the Sex Pistols during 1976 and thereon.

The exhibition contains an array of contextual material from the Archives of Popular Culture/Counterculture held at Liverpool John Moores University together with important material from private collections. Much of the material that examines the pop style of 1966 has been barely seen in the intervening decades, including rare items concerning Op Art, Andy Warhol and the sixties fashions that would influence Punk – as well as material relating to youth politics such as the Sunset Strip Riots – as teenagers in America and the UK began to realise that consumer power could translate into political power.

And then there is the music. In 1976, Punk groups like Sex Pistols, Buzzcocks and Eater looked back to 1966 with covers of Substitute (the Who), Understanding (Small Faces), I Can’t Control Myself(Troggs), and I’m Waiting for My Man (Velvet Underground). There is also a direct link between the harsh garage punk of 1966 – first collected on Lenny Kaye’s 1972 Nuggets compilation and defined there as ‘Punk’ – and the accelerated, distorting brevity and harsh attitudes of 1976 Punk.

The exhibition also includes two major documentary films produced by Arena, the BBC’s flagship documentary strand: 1966 (2016) and Punk and the Pistols (1995) – both directed by Paul Tickell and written by Jon Savage. The two films will be screened throughout the exhibition as part of a special ongoing collaboration with Anthony Wall, Arena Series Producer/Editor.