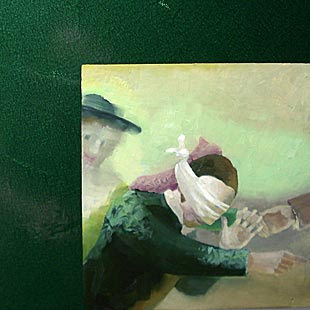 The title of the exhibition is taken from the very near last lines of the Waste Land (T.S.Eliot 1922) The paintings in the exhibition take fragments from or make reference to famous historical paintings. The original paintings are very beautiful as surfaces and objects but now seem alien to our modern sensibility or taste. The status of these paintings as Art often obscures darker narratives. By making selections, re-framing or filtering the artists seek to re-present these fragments of art history into a sharper contemporary focus. The resulting images become more ambiguous or disturbing.

Vincent Lavell was born in Liverpool in 1960. He studied painting at Liverpool Polytechnic (1983-86) and at the Metropolitan University Manchester (1992-93) He has worked in a variety of educational contexts including universities, prisons and hospitals. He has exhibited his work widely and has a painting in the national collection (Williamson Art Gallery and Museum). From 1989 to 2004 Vincent worked as a freelance educator and Education Curator at Tate Liverpool. He continues to teach full time at Wirral Met College and has a studio based in Liverpool.

Jay Chesterman was born in Birkenhead 1992. His interest in art began as a teenager at The Mosslands school, where he was introduced to painting. He later studied at Wirral Met College and completed a Fine Art degree in 2014. In 2015 He was awarded the fellowship at Wirral Met College. He completed a PGCE degree in 2018 and now exists as a qualified teacher. He has exhibited his work locally in various group exhibitions and has recently won the Spring Open competition 2019 with ‘Rembrandt self-portrait 1642 #10yearchallenge’ which is now in the national collection (Williamson Art Gallery and Museum).