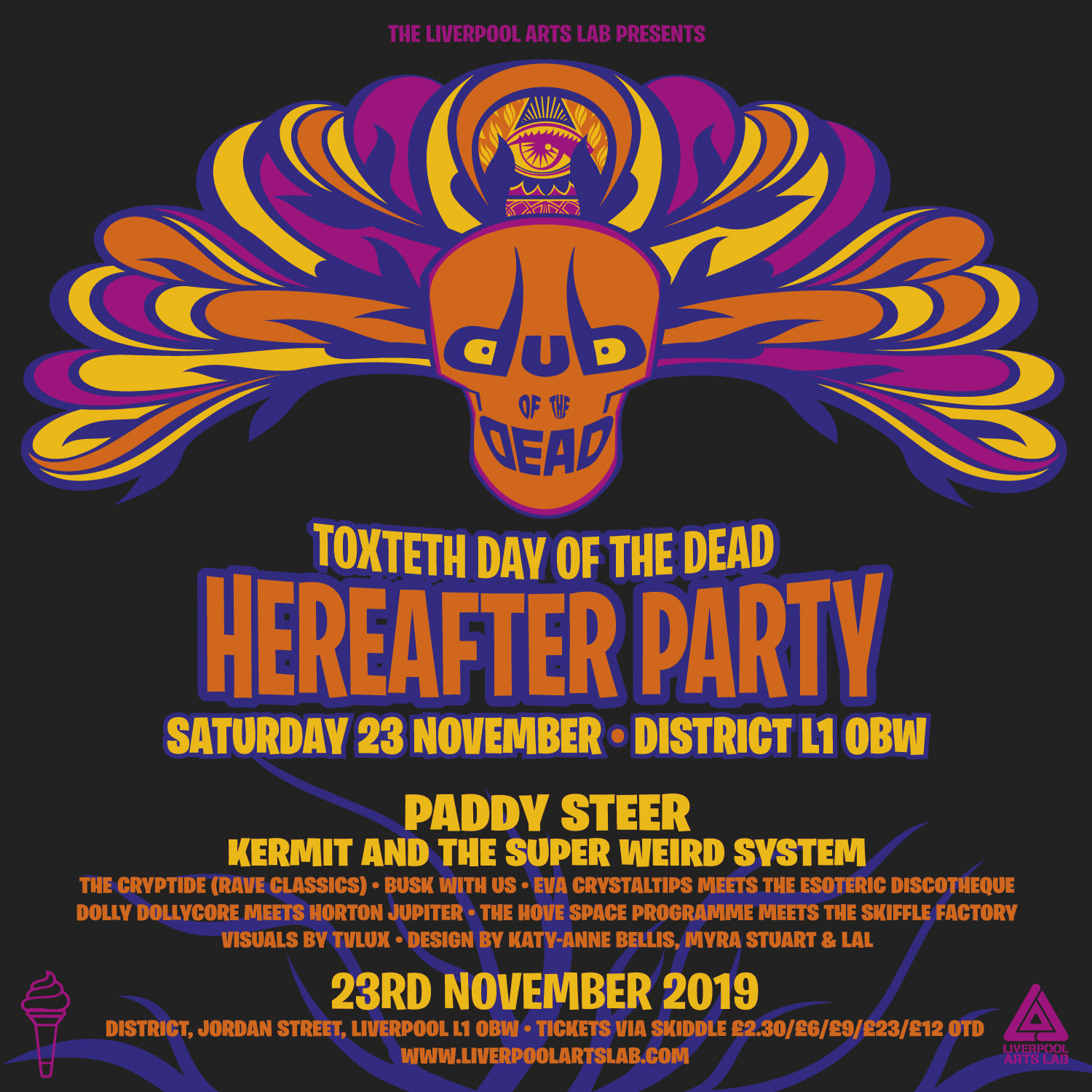 The Liverpool Arts Lab is delighted to present the Hereafter Party for this year’s Toxteth Day of the Dead!

Looking to build upon the momentous events last year, as people flocked from far and wide to pay reverence to those no longer with us who left a significant impact on Toxteth, this year will see fresh plans from Jimmy Cauty and Billy Drummond, a new route for the Beating Of The Bounds and more MuMufication bricks laid in The People’s Pyramid.

As the solemn daytime proceedings draw to a close, the Liverpool Arts Lab has ensured they’ll flow into a party in the Baltic Triangle as the night falls.

PADDY STEER
Paddy Steer is a Zelig-like character along the timeline of Manchester’s musical activity. It’s a testament to his musicality that he has played with such a wide range of music and artists over the years.

In rejection of the notion of ‘immaculate reproduction’, live performances from Paddy’s own project err more daringly and admirably on the frontier of chaotic abstraction, expression and focussed blunder, dice rolling down the hill in case of duende, as from behind his stacked array of instruments, the anarchically intrepid punk gargles through a vocoder with his xylophone, all a-clatter under disco lights and doilies.

He creates his tools, as he creates his craft, here from scratch, there from new, ever from long-garnered experience that includes running the massive ensemble Homelife, years hence. In style he is unique on the circuit that knows him, on which similarly his blinkered resolve and capacity to create must be unparalleled.

KERMIT AND THE SUPER WEIRD SYSTEM
Kermit And The Super Weird System is the latest offering from the ever-evolving Moss Side artist. Channelling the likes of Big Youth, Dillinger and U-Roy, Kermit Leveridge’s new project sees him assume the role of a JA deejay, toasting over the booty-shaking, dubwise good times spun by Super Weird selector, Josh Ray.

From an original British b-boy to a Ruthless Rap Assassin, Kermit has constantly shape-shifted his way to the front of the vanguard of music. Having been the first dancer photographed spinning on his head in the UK during his Broken Glass days, his rhymes were later hailed by Roots Manuva as the ‘the roots of grime’ and as a founding half of Black Grape, alongside Shaun Ryder, Kermit climbed to the top of the UK charts, securing his name in the annals of music history.

THE CRYPTIDE
Keep It Cryptic’s very own collective, the rave monster known only as The Cryptide. Emerging out of the KIC secret parties, The Cryptide rose out of the depths to bring back the twisted hedonism of the rave era. With Ché Wilson, Josh Ray, Cosmic Shepherd and Jack Hendrie on the selections, they move between acid, electro, techno, breakbeats and jungle, all punctuated by an analog dub siren.

The collective have a heavyweight 4-track EP due later this year on Keep It Cryptic Recordings, including tracks ‘Art Is Magic’, ‘Changes Of Life (Think)’, ‘Who Ate All The Acid?’ and ‘Universal Sounds’.

EVA CRYSTALTIPS MEETS THE ESOTERIC DISCOTHEQUE
French born, Edinburgh based DJ Eva Crystaltips is spreading her love for disco music with a hint of ‘je ne sais quoi’ – gaining due recognition over the past few years, taking to stages at Snowbombing, Lost Village Festival & most notably a huge gig at London’s 5000 capacity Printworks.

Here she meets Josh Ray’s Esoteric Discotheque, a project set up for the Liverpool-based DJ to explore the leftfield side of dance music. An outernational adventure, the Esoteric Discotheque weaves its way through cult classics, warped dub mixes, Balearic delicacies and hidden soul gems.

DOLLY DOLLYCORE MEETS HORTON JUPITER
Dolly Dollycore is an all together flowing chaos musician, sporadic transformer, reality interloper, writer, all night dancing vigilante, the flight of ducks. Dolly is mad-cap in love with the universe.

Here she meets Horton Jupiter, a London-based DJ and collector of records of broad range, predominantly disco / dance music in its all forms, with psychedelic spectacles. After 10 years as a techno DJ, 4 years as one of the original Club Kosmische DJs and 11 years in pop, he currently co-promotes 4 separate nights, the only common denominator being FUN.
———————–

BUSK WITH US
Busk With Us is an interactive performance, workshop and music media organisation. They provide the platform for people to beat to the rhythm of their own drum and seek to spread creative confidence, spontaneous expression and social integration far and wide through the power of free-flowing musical jams.

THE HOVE SPACE PROGRAMME MEETS THE SKIFFLE FACTORY
The Hove Space Programme is a creative collective based in Brighton, seeking to create more meaning in the world around them.

Here they meet the Liverpool Arts Lab’s anarcho-techno remix of the Skiffle movement in the late ’50s, early ’60s Liverpool. The Skiffle Factory brings the DIY essence of Skiffle into the now with the addition of tripped out electronics and dub effects.
———————–

Visuals by TVLUX
Tristan Brady-Jacobs aka TVlux is a stalwart of Liverpool’s creative underbelly. Alongside his formidable wife, Delia, the pair have been pivotal in the city’s counterculture for a number of decades. As the VJ, TVlux, Tristan blends together his vast collection of cinematic curiosities, sci-fi wonders and various other idiosyncratic artefacts from the fringes of culture.
———————–

Design & Decor by KATY-ANNE BELLIS, MYRA STUART & LAL
Transforming District into another world, Liverpool’s Katy-Anne Bellis, Brighton’s Myra Stuart and the Liverpool Arts Lab will be working together to set the scene for the night’s proceedings.
———————–