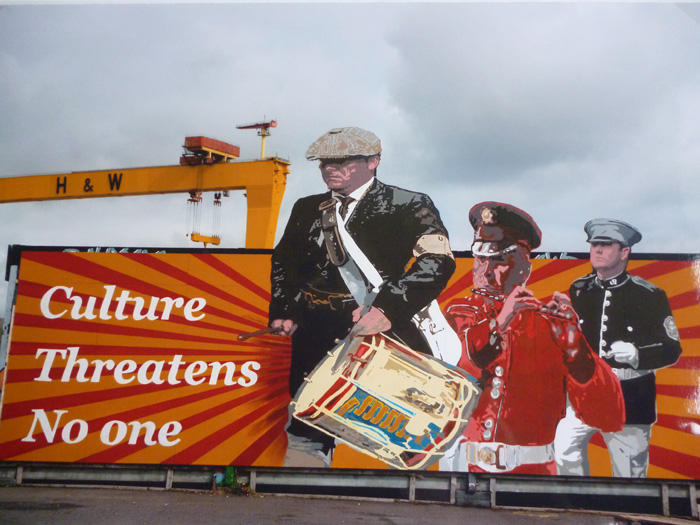 ‘The description of Northern Ireland as a ‘post-conflict’ society has to be treated with scepticism. For while there is no sustained, high-level campaign of armed conflict of the sort witnessed between 1969-1996, the place remains riven by fundamental forms of division and antagonism – sectarian, social, historical, political and psychic.

The photographs displayed in this exhibition, taken between 2012-2016, focus on the ways in which the representation of symbolic, cultural and physical conflict plays a role in everyday life.

Murals, graffiti and improvised street signs have been used as forms of cultural activity in Northern Ireland from the height of the war, through the Peace Process, and on to the so-called ‘post-conflict’ period.

Viewed historically they form a significant record that reflects a variety of perspectives – Nationalist, Republican, Unionist, Loyalist and non-aligned. And they stand as testimony to the ways in which public spaces became and remain sites for the representation of contested history, the expression of political views, the articulation of community concerns, the formation of memory, and the process of ideological interpellation.

The walls in particular have functioned as material structures of feeling that register history in a deep form. Their messages, ranging from overtly political declarations, to brutal depictions of the conflict, to comments on peace and the Peace Process, to laughter, mockery and irony, reflect and refract a complex lived experience in which violence or the threat of violence is and has been central.

The photographs in the exhibition are part of a collection of more than 20,000 images, mostly of murals, dating from 1979. Approximately 4500 photographs are available in a fully searchable and downloadable historical archive hosted by the Claremont Colleges Digital Library (google Tony Crowley Murals of Northern Ireland or go to
http://ccdl.libraries.claremont.edu/cdm/landingpage/collection/mni’.
Professor Tony Crowley 2016

Tony Crowley was born and brought up in Liverpool. He is Professor of English at the University of Leeds and has taught in a number of universities in the United States and the United Kingdom.

The exhibition is open to the public on Friday 1st July until Sunday 17th July. The Cornerstone Gallery is open every day from 9am-5pm.