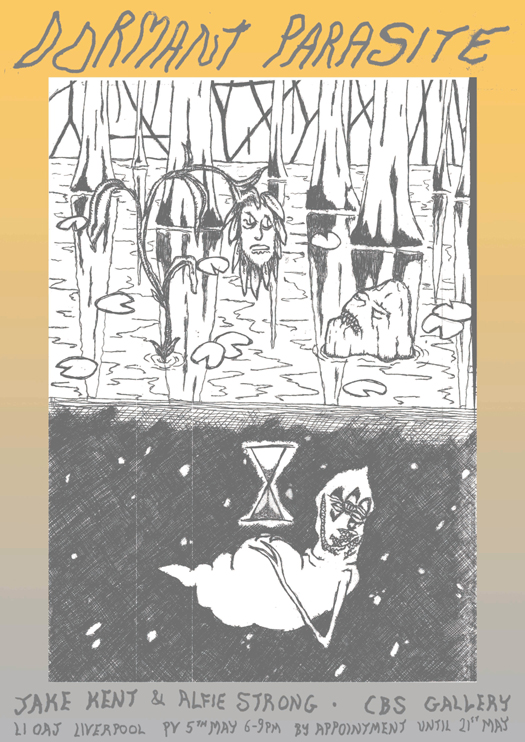 CBS Gallery invites you to join us for the opening of Dormant Parasite, our inaugural exhibition in our new home at 63 Blundell Street, The Baltic Triangle.

“So we’re thinking about future artefacts of our future, objects made after our life time and consumed by time after the makers life. While in reality we try and use this process to question the relevance of countercultural movements of our past and possible ways of productive (sub)cultural opposition in our present”

“Don’t the works exist in a tired version of science-fiction? Repeating the warnings that follow the narrative of mad max, waterworld or even the bed-sitting room…”

“These projections of the future are exciting though because the system of capitalism is either totally destroyed or hanging on (and maybe that’s ideological in its self – Hollywood producing films that tell you “no matter what, capitalism lives!”). But in this state art loses its value. Would art be salvaged if it came to that? Would it retain any value and how would that value be measured?”

“What value are we producing? We might as well melt the work down into a compressed cube of trash before the local tip does the same job for us in 3 or 4 years’ time. We’ll call it conceptual”

“Yes. Demonstrate to ourselves the scale of our impact on the planet in the hope we might change or better, quit altogether”

“Take a step back, see the structure and identify the point at which culture becomes: a commodity, a front, a tool for gentrification, a weapon of colonialism and then figure out a way to resist that”