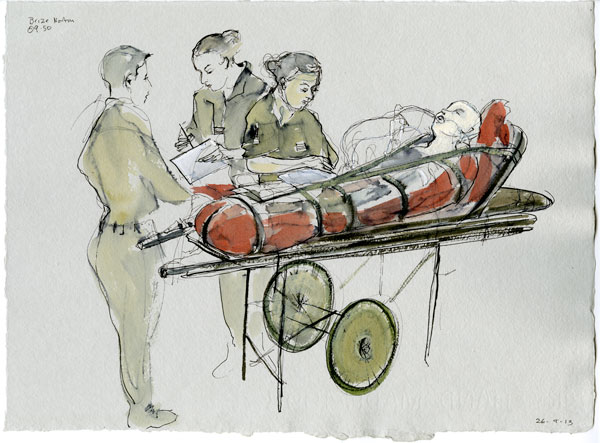 Following a 1999 Artist’s Residency at the Royal Liverpool University Hospital Trust, Julia’s drawings of 20th Century medicine were exhibited at The Royal College of Surgeons, London.

Inspired by Tonk’s work, and with the endorsement of the M.O.D. and collaboration of The Royal College of Surgeons of England, Midgley set out to describe and record the training of military medical personnel before their deployment to Afghanistan, and, the rehabilitation of recovering personnel following their surgery.

The challenge was how to describe confrontational subject matter without intimidating exhibition audiences.
Thanks to the minimally invasive nature of a pencil working on paper an artist is readily tolerated, particularly in arenas of sensitivity such as surgery or disaster. This is particularly true with regard to military medicine where for many reasons photography is highly restricted. Although the military medical services are in constant receipt of requests from artists, photographers and filmmakers, this project was highly unusual in being granted approval.

This show features a large number of drawings from Julia’s work on this project created between 2011 and 2014, and is a unique insight into the realities of modern conflict.

Join Julia Midgley in the gallery on Saturday 24 October at 1.45pm for an artist’s tour of the exhibition. Free event, all welcome.