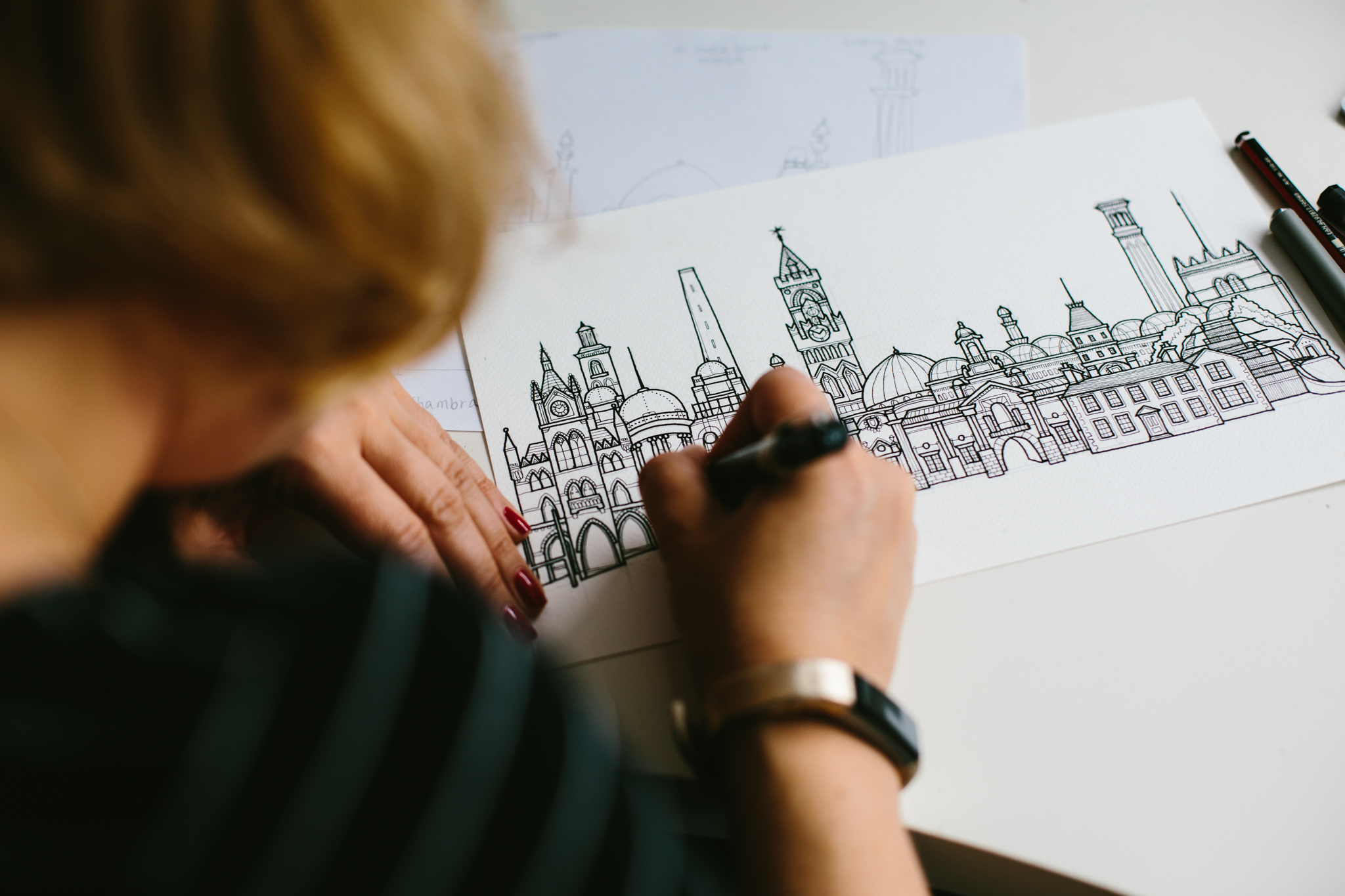 The exhibition launches with an evening event on 7th December 2018, between 7-10pm, at the newly-reopened Bold Street Coffee.

Liverpool-based Becka has been drawing architecture and buildings for years, and embarked on her latest series of illustrations only two years ago, creating beautiful skylines of cities across the UK, gaining attention from national media including ITV’s This Morning and Ethos Magazine.

This is the first time Becka has exhibited so many of her skyline creations in the same room – with around 50 illustrations – including her brand new Bold Street drawing, created especially for this event.

Becka explained: “What started as a single skyline of Liverpool quickly evolved as I had requests from almost all major cities throughout the UK, largely via my website. It’s taken over two years but I now think I have the country covered and am really excited to present the collection as a whole!”

“It’s lovely to be asked to be part of the Bold Street Coffee relaunch and the illustrations sit perfectly in this type of environment. Anyone who’s interested is welcome to pop in and take a look – and can grab a lovely cup of coffee, some food or even a beer at the same time!”

The process Becka uses to research each image aims to achieve a relevant and contemporary, yet recognisable, snapshot of each location. She starts with an appeal via her social media for people’s ideas of the most memorable landmarks in each city, and then uses a tally mark system for voting.

The 8-10 most popular landmarks make it into the final image – which is then carefully planned out and then drawn by hand using a selection of black fineliner pens.  The resulting image is then recreated as a greetings card, a print or, in several cases, a huge wall vinyl.  Including little touches like a hot air balloon for Bristol, or Lincoln’s Red Arrows, gives a touch of personality to each drawing.

Skylines cover Aberdeen to Portsmouth with Becka branching out earlier this year to some international locations including San Francisco and Berlin.  When asked about her decision to include some smaller towns, such as Blackburn and Kendal, Becka explains: “I discovered that when I drew Middlesbrough it was really popular, and I sold a lot of prints. I couldn’t work out why it was attracting so much interest, and then the same happened with Leicester.  It then struck me that a lot of towns and smaller cities are overlooked – skylines of London and Liverpool are really common, but less well-known places don’t get a look-in.”

Becka’s favourite skyline is her pretty Lake District illustration, featuring Derwentwater, Keswick Pencil Museum and – of course – some mountains.  “I grew up in the Cumbria,” she says: “so it’s always going to be close to my heart”.

And the plan for 2019?:  “I love the idea that someone can choose a series of skylines – one for the place they were born, one for where they went to uni, one where they were married and one where they now live… I’m planning on continuing drawing more and more skylines so that I can make this a real possibility for as many people as possible!”

The exhibition launches at Bold Street Coffee on 7th December and runs until 29th January 2019.  Becka will have some prints available for purchase in Bold Street Coffee, but work can be also be bought online via her website, Etsy and notonthehighstreet.com.