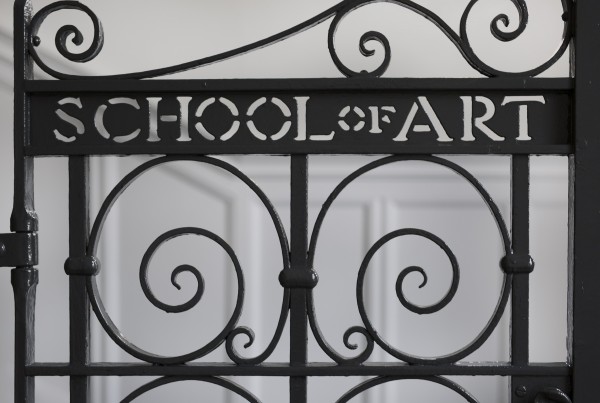 Our autumn season of interlinked exhibitions focuses on the changing nature of artistic education. The Art Schools of North West England is an exhibition of photographs and texts documenting 30 historic sites of art education.

There were over 150 art schools in this country in the mid-1960s. Most of them are now closed or absorbed into other institutions and the buildings repurposed, remodelled or demolished. What did it mean to have an art school in every town and what can we learn by discovering their fate?

John Beck and Matthew Cornford are hunting down all of England’s art schools and photographing the sites as they are today. Sometimes the original building remains, sometimes car parks, supermarkets or building sites have taken their place. This exhibition features new images of 30 art school buildings that were once an integral aspect of creative life in the North West.

Importantly, the idea of ‘art school’, especially as it took shape during the 1950s and 1960s, was more than a place to study art; attendance came to represent a particular stance toward the world, an attitude most vividly embodied by Liverpool College of Art‘s most famous alumnus John Lennon. Arguably more than anyone else, Lennon made being an art student seem like an essential step on the road to the creative life, where the ordinary became extraordinary.

Celebrating and reflecting on the prominent place art schools have held in the region, the exhibition is an invitation to explore the value placed on education in the arts, to think about the legacy of the art schools and to consider what relation art should have to broader society now and in the future. Set against the backdrop of Bluecoat’s arts centre origins, when a group of students in 1907 started an independent arts school, the Sandon Studios Society, The Art Schools of North West England marks the wide and deep history of creative activity in the region and the institutions that made it possible.

John Beck and Matthew Cornford have been researching the cultural history of British art schools together for a number of years and, since 2009, have given numerous talks at galleries and universities, including ‘The Lost World of the Provincial British Art School’ at Tate Britain’s 2011 ‘Reflections on the Art School’ conference. The Journal of Visual Culture published their article ‘The Art School in Ruins’ in 2012 and an artists’ book, The Art School and the Culture Shed, was published in 2014. The Art Schools of North West England is the first occasion their photographs and texts will have been exhibited in a public gallery.

John Beck is a writer and Director of the Institute for Modern and Contemporary Culture at the University of Westminster. He has published widely on the politics of place in relation to landscape photography, art and literature. Recent and ongoing projects include a co-authored study, with Ryan Bishop, of 1960s art and technology projects in the US that looks at networks of influence across art schools, universities and the military, and a book on landscape and power.

Matthew Cornford is an artist and leads the BA (Hons) Fine Art Critical Practice course at the University of Brighton. He began working with David Cross after graduating from the RCA in 1991, for over 20-years Cornford & Cross created a wide range of art projects in response to specific contexts and situations, a monograph on their work, Cornford & Cross, was published in 2009. In 1997 Cornford & Cross presented Power to the People: A Happening, turning the main gallery at the Bluecoat, Liverpool into a record fair for a day, part of Mixing it a series of live
art commissions.

Did you attend an art school in North West England? We’d like to hear from you. Liverpool’s contemporary arts centre, Bluecoat, is working with artists John Beck and Matthew Cornford on an exhibition this November that documents some 30 art schools in the region, many of which have disappeared. We arelooking for people who studied at art school to be interviewed for a radio programme that will be broadcast during the exhibition. Were you an art student between the 1960s and 1990s with memories you’d like to share?

Alongside the gallery exhibition will be a series of events.

John Beck and Matthew Cornford introduce their exhibition in this informal tour in the gallery.

Directed by Tony Richardson and with a screenplay by Shelagh Delaney, this fine example of British kitchen sink realism is set in Salford. It imagines a post-nuclear family where gay textiles art student Geoffrey (Murray Melvin) and unmarried mother Jo (Rita Tushingham) set up home together, albeit briefly. It’s a utopian moment not out of keeping with the spirit of art school.

Symposium: What Was Art School?

The importance of the art school in British cultural life will be explored in this informal event taking its cue from The Art Schools of North West England exhibition. Artists John Beck and Matthew Cornford introduce the exhibitions themes and explore, with an invited panel including artists Pete Clarke and Jade Montserrat, questions including: where werethe art schools and what has happened to them, what is the role of art education and the place of art in contemporary Britain?

6.30pm Gallery Introduction / 7pm Screening of Little Malcolm and His Struggle Against the Eunuchs (1974) (109min)

This comedy drama film, directed by Stuart Cooper was the first feature film produced by George Harrison, who also supplied incidental music. Featuring Oldham Art School and shot primarily on location in a wintry Lancashire, expelled art student Malcolm, played by John Hurt (himself an ex-art student), sees himself at war with what he calls ‘the Eunarchy’of social conformists and sexual timidity.