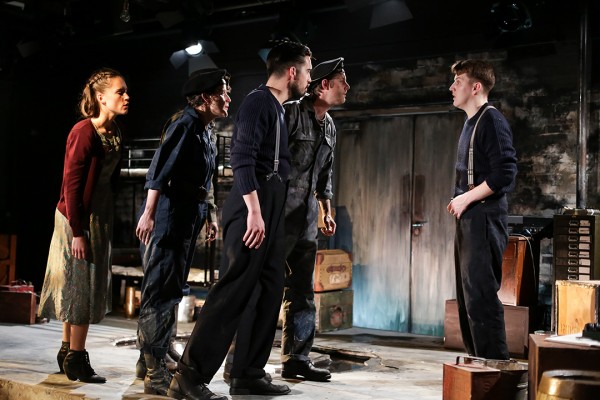 Narvik: a new play with songs

“If I was to throw myself beneath that tide… If I was to let the water take me, ’til the cold felt like heat, like love…”

Narvik tells the story of a Liverpudlian man and a Norwegian woman pulled together and torn apart by war as the events of one summer cause ripples across an ocean of time.
Fusing live folk music and new writing to create a patchwork of memory and dream, Narvik is a bold new play set during the Second World War that brings to life a powerful story of love, guilt, heroism and betrayal.

Following an acclaimed run at the Liverpool Playhouse Studio, Narvik embarks on a national tour as part of Box of Tricks’ tenth anniversary season. Lizzie Nunnery is an award-winning playwright (‘Intemperance’ at Everyman Liverpool and ‘The Swallowing Dark’ at Liverpool Playhouse Studio and Theatre503) and celebrated singer/songwriter (“Rebel folk endures and develops uniquely – just listen to Lizzie Nunnery” – The Observer).

Due to the intimate nature of this piece latecomers will not be admitted.

“Sailors and sound effects are a perfect match in a wartime tale. Lizzie Nunnery’s play with music captures bittersweet memories of the North Atlantic convoys as documentary meets melancholy ballad… Narvik is not like anything else I have heard in the theatre… Full of rich material… A compressed exploration of the effects of war, reaching out to a language other than words.” – **** The Observer

“It has a dreamlike eeriness — and it is acted with a raw and intimate directness… The songs — from wistful, rippling sea shanties to lusty drinking anthems and yearning rhapsodies — are pungently atmospheric, accompanied by an on-stage three-strong band… It has a tang and a tenderness that linger.” – **** The Times