Home Bluecoat: Liverpool Biennial 2018: Beautiful World Where Are You?

Bluecoat: Liverpool Biennial 2018: Beautiful World Where Are You? 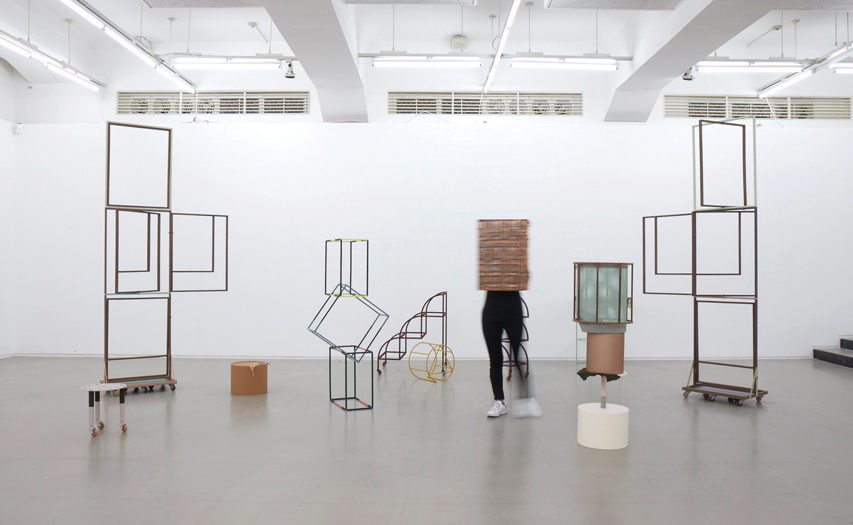 Bluecoat: Liverpool Biennial 2018: Beautiful World Where Are You?

A monumental sculpture by Abbas Akhavan fills Bluecoat’s Vide gallery. Variations on a Ghost makes reference to artworks destroyed by ISIS over the last decade, in particular the ancient sculptures depicting the Assyrian protective deities called Lamassu – half man, half lion. Using a technique called ‘dirt ramming’ Akhavan has recreated the claws of the hybrid deity with soil and water. Over the exhibition period, the physical appearance and smell of the sculpture will change, its surface appearing more stone-like as a grey crust develops.

Melanie Smith’s new film Maria Elena takes its title from a town situated in the Atacama Desert, South America; one of the world’s driest deserts. The settlement is connected to the oldest salt mine in Chile, which was owned by the Guggenheim family in the 1920s. The film combines fragmented narratives of the colonial past with the dusty present of the salt mine. It further explores Smith’s interest in industrial expansion in the Americas during the 20th century and its relationship to violence and crime.

Conceived as a visual translation of the Korean musical notation ‘Jeongganbo’, Land Sand Strand is a new multi-part installation by Suki Seokyeong Kang. The work transforms the exhibition space into a grid. Building on the concept of the hwamunseok – a traditional Korean woven mat, interpreted as the minimum space provided for each individual in society – it is activated by performers and the audience. The choreography, inspired by the Spring Oriole Dance and traditionally performed on the hwamunseok,is shared with visitors. The movements on the mat serve as the blueprint for the wider installation consisting of painting, sculpture and video.

In the adjacent gallery is a major new project by Ryan Gander, Time Moves Quickly. Gander has worked collaboratively with five children from Knotty Ash Primary School in Liverpool – Jamie Clark, Phoebe Edwards, Tianna Mehta, Maisie Williams and Joshua Yates – to produce a series of artworks and a film exploring the activities carried out in the workshops. In addition to the presentation at Bluecoat, Gander and the children have created a new public artwork for the city. The project takes inspiration from the Montessori method of education, based on self-directed activity, hands-on learning and collaborative play.

Silke Otto-Knapp’s new large-scale painting wraps around the perimeters of the space, combining figures in group formations with abstract panels. At the centre of the work is the construct of the stage, with motifs ranging from choreographed groups of figures, historical stage sets and pared-down landscapes. Otto-Knapp works with watercolour on canvas, using a process of removal and accumulation of pigment in order to create spaces where the flatness of the pictorial surface contrasts with an illusionistic construction of space.

Shannon Ebner has developed a photographic work with a related sound piece in the gallery’s courtyard. Tailored to its environment, this commission connects to Ebner’s series STRAY (2017), which comprises photographs and readings by the American poets Susan Howe and Nathaniel Mackey.

Fight is a series of silkscreen posters by Janice Kerbel located outside Bluecoat. Kerbel first choreographed an unarmed fight for a group of 12 individuals. Every action of the fight was recorded on sheets of paper the size of a body, using text in the area corresponding to the part of body where the impact is received. These drawings act both as recipients of action – becoming illegible with the layering of type – and a score for future action. The drawings were then printed onto campaign poster paper, which are presented from the ground up, emphasising their relationship to humans. Kerbel is interested in how fights can both erupt and dissipate unannounced, regardless of context or setting.

Bluecoat is the oldest building in Liverpool city centre and the UK’s first arts centre. Showcasing a year-round programme of contemporary visual and performance art, the venue has provided space, support and a public platform for artists for over 100 years.