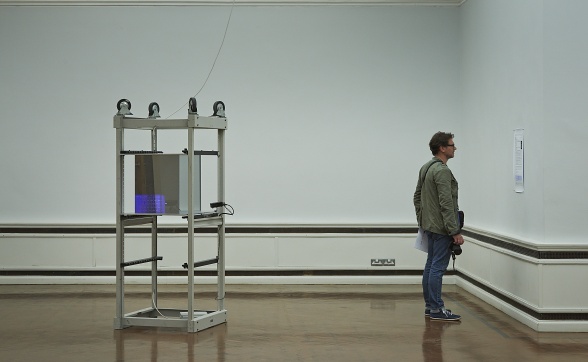 As part of their ninth edition, Liverpool Biennial jointly present with Bluecoat a series of new commissions by Irish artist Dennis McNulty under the title Homo Gestalt. These include a data driven installation in Bluecoat’s Vide, a digital app and an off-site performance work set around New Hall Place, a 1970s 13-storey brutalist style office located in Liverpool’s commercial district.

McNulty is interested in regulatory systems – mechanical, technological, managerial, financial, biological, cognitive, social – and how their structures, constraints, and possibilities affect our behaviours and environment. For this new body of work he draws on fictional and real world sources. These include More than Human by science-fiction writer Theodore Sturgeon which describes a scenario in which multiple humans blend their abilities to act as a single organism. McNulty pairs this idea with the ‘multinode’, a concept developed by pioneering cyberneticist Stafford Beer to describe a collective biological or machinic decision-making entity. The result is Homo Gestalt, a collective technology that is performed into existence by the participation of audience members.

Homo Gestalt forms part of Liverpool Biennial 2016’s Software episode, which points towards a broader social and cultural understanding of technology beyond its purely technical application. Software commissions can be seen in multiple venues across the city including FACT and The Oratory.

McNulty has devised a 40 minute promenade performance set in and around New Hall Place, a 1970s office complex locally known as ‘The Sandcastle’. New Hall Place was designed to reflect the management systems and hierarchies of the company that commissioned it. The complex also incorporates a 1930s ventilation shaft and more recent architectural additions. McNulty’s performance sculpts a spatio-temporal form for the audience to inhabit, a journey through these different times zones which simultaneously addresses their bodies and minds. – Free, limited availability