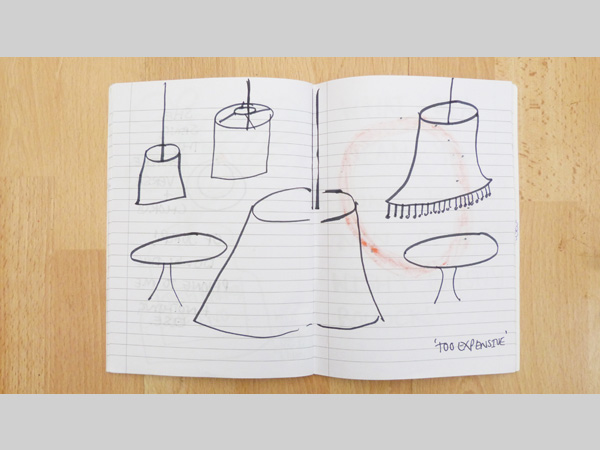 Prompts for this painting include the colour purple (difficult), grabbing dinner with my brother (not difficult, unless I’m skint), comments about where we went from friends, lampshades and interior decor (restaurant decor), Eduardo Paolozzi’s The Cage, 1951 and Pino Pascali’s Trap, 1968. Something about traps and corsets and dinner (maybe). Oh, and drawing, as always.

I make small things big and big things small, both in terms of their size and feeling.

I paint and draw and I like to keep the works open, unresolved and enough about me to communicate something thought, felt or seen, but not so much about me that I’ve locked down the narrative.

Claire Dorsett (born 1985, Ipswich, UK) graduated from her BA (Hons) in Fine Art Painting at The University of Brighton in 2007 and from MFA Painting at The Slade School of Fine Art in 2010.

Since then she has exhibited both nationally and internationally. Recent solo exhibitions include Indoor Kid, Duvet Days, London; You Do The Talking, George and Jørgen Gallery, London, which was reviewed in Modern Painters, and a solo presentation at The Solo Project, St. Jakobshalle, Basel.